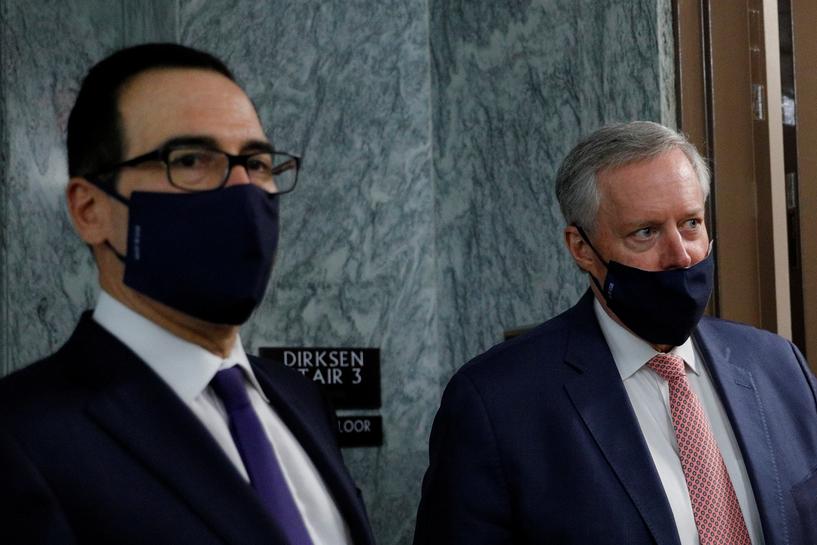 The Trump administration on Sunday called on Congress to pass a stripped-down coronavirus relief bill using leftover funds from an expired small business loan program as negotiations on a broader package ran into resistance.

The proposal was the latest twist in the on-again, off-again talks to try to secure more stimulus for the economy, which is struggling to recover from coronavirus-related shutdowns that threw millions of Americans out of work.

In a letter to lawmakers, Treasury Secretary Steve Mnuchin and White House Chief of State Mark Meadows said they would continue to talk to Senate Democratic leader Chuck Schumer and House Speaker Nancy Pelosi to try to reach agreement on a comprehensive bill.

However, they said Congress should “immediately vote” on legislation to enable the use of the unused Paycheck Protection Program funds, which total around $130 billion.

“The all or nothing approach is an unacceptable response to the American people,” they wrote.

A spokesman for Pelosi, the lead negotiator for Democrats, did not immediately respond to a request for comment.

White House spokesman Brian Morgenstern told reporters the funds would be used to reopen the Payroll Protection Program, which expired earlier this year, to “allow businesses to continue to use it to keep their employees employed.”

President Donald Trump on Friday offered a $1.8 trillion coronavirus relief package in talks with Pelosi after urging his team on Twitter to “go big” – moving closer to Pelosi’s $2.2 trillion proposal. That came after Trump earlier last week said he was calling off negotiations until after the Nov. 3 election.

Trump’s reversal and higher offer drew criticism from several Senate Republicans, many of whom are uneasy about the nation’s growing debt and concerned a deal would cost Republicans support in the upcoming election.

Federal Reserve officials have urged Congress to be aggressive in supporting the U.S. economy. The head of the Minneapolis Federal Reserve Bank on Sunday said the recovery had “flattened out” indicating the need for further stimulus.

“A lot of people are suffering. A lot of small businesses are suffering,” Minneapolis Fed chief Neel Kashkari said on CBS’ “Face the Nation.” “We need Congress to continue to be aggressive so that the recovery can be stronger.”

White House economic adviser Larry Kudlow said on CNN’s “State of the Union” that he thought Senate Republicans would eventually come around.

“I think if an agreement can be reached, they will go along with it,” he said, adding that there will be “further efforts of negotiation” on a package this week.