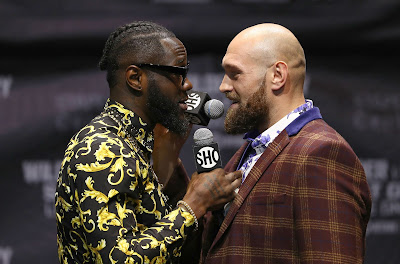 Tyson Fury and Deontay Wilder both threatened to land crushing knockouts as they arrived in Las Vegas for their heavyweight grudge match.

Fury and Wilder spoke to the media outside the T-Mobile Arena, the site of their trilogy clash, before settling their bitter rivalry in this weekend’s WBC title fight.

The British star has vowed to deliver another brutal victory after stopping Wilder in the seventh round of their rematch in February last year to win the WBC title.

“It’s going to be exciting,” said Fury. “Wilder is a dynamite puncher and as we’ve seen over the last few months, we’ve seen the heavyweight landscape change so much. But I’m still on form, doing what I’ve got to do.

“I’m going to knock him spark out on Saturday night and I cannot wait, to get him in that ring and give him a good hiding, for sure.

“Saturday night is going to be a special night. I think the fans are in for a treat, as they always are when the ‘Bronze Bomber’ steps in the ring.”

Asked for a pre-fight prediction, the American said, “I see me beating him up and knocking him out.

“There’s many things that I visualised in the first fight, along with the second, and I didn’t execute the game-plan.

“But this time around it’s just a different feeling. All the way around. The atmosphere. The energy as a whole.

“I’m looking forward to putting on a great performance, come October 9, and those that’s going to be in the arena are going to feel the electricity that’s in there.”

“I woke up all night thinking it was a dream,” Kourtney Kardashian says of Travis Barker’s engagement.

Nnamdi Kanu arrives in court as the Biafra trial resumes in Abuja.

How Davido turned down Sanwo-invitation Olu’s to a concert

Regina Daniel, Ned Nwoko, and their son go to the Red Sea (Video)

DJ Cuppy days after matriculation at Oxford University: “I hope this degree is worth it” (Photo)