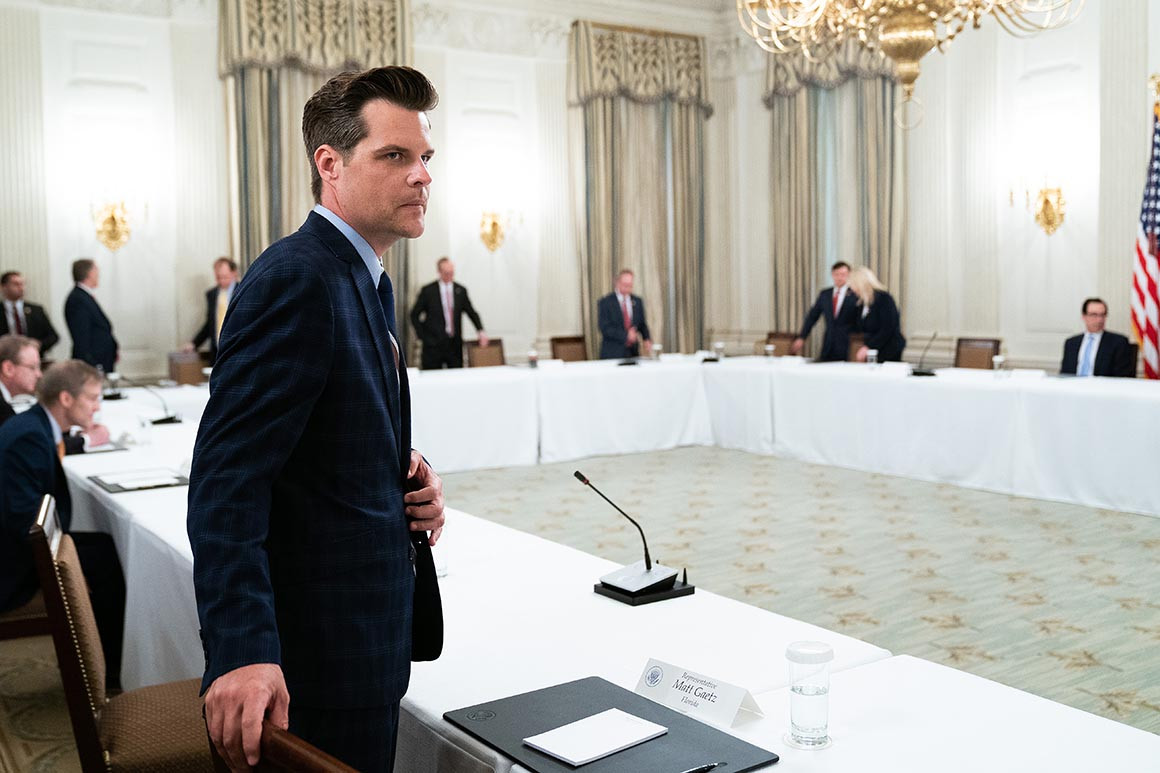 Twitter on Monday added a warning label to a tweet by Rep. Matt Gaetz that called for members of the radical activist group antifa to be hunted down like “terrorists” for violating the company’s policies against glorifying violence — the social network’s latest enforcement action against a prominent GOP official.

The Florida Republican, one of President Donald Trump’s fiercest allies on Capitol Hill, ratcheted up his rhetoric against the left-wing group in a missive earlier Monday, writing, “Now that we clearly see Antifa as terrorists, can we hunt them down like we do those in the Middle East?”

The remarks come on the heels of Trump’s announcement that he plans to designate the activist group known as antifa, short for “anti-fascist,” as a terrorist organization.

“We have placed a public interest notice on this Tweet from @mattgaetz. The Tweet is in violation of our glorification of violence policy,” a Twitter spokesperson told POLITICO in an email. “As is standard with this notice, engagements with the Tweet will be limited. People will be able to Retweet with Comment, but will not be able to Like, Reply or Retweet it.”

In response, Gaetz called the warning his “badge of honor” and vowed not to relent on his rhetoric.

“Antifa is a terrorist organization, encouraging riots that hurt Americans,” he tweeted. “Our government should hunt them down. Twitter should stop enabling them. I’ll keep saying it.”

The social network has faced a firestorm of criticism from Trump and his allies, including Gaetz, for taking the same action against a recent Trump tweet that appeared to urge the shooting of looters in Minnesota.

“Take the Gaetz tweet down right now @twitter. RIGHT NOW,” tweeted Sen. Chris Murphy (D-Conn.), whose state was the site of the Sandy Hook Elementary School massacre. “The survivors of mass shootings are lighting up my phone. They are scared to death this will inspire someone to start shooting into a crowd tonight. They are right.”

David Hogg, an advocate for tighter gun regulations and a survivor of the Marjory Stoneman Douglas High School shooting in Parkland, Fla., also took umbrage at Gaetz’s comment. “Imagine saying you love your country but embracing the extrajudicial killing of your fellow citizens,” he tweeted in response to Gaetz.

Gaetz took exception with Murphy’s remarks. “Spare me your woke virtue signaling,” he tweeted in response.

“Governments go after terrorists. Individuals don’t,” he added. “We — the government — should continue to do so. And Antifa is rightly on the list!”

After Twitter’s ruling Monday, Gaetz also tweeted in support of Trump’s call to revoke the online industry’s legal immunity over user content, Section 230 of the Communications Decency Act. The 1996 law has come under fire from conservatives who accuse Silicon Valley of suppressing their voices.

There’s no evidence of systemic political bias by Twitter and other social media companies, but rolling back Section 230 has become a rallying for Trump and his allies who allege there is.

READ ALSO:  I will reach out to Oshiomhole if he has anything to contribute – Gov Obaseki

How to Select an Exchange for Crypto Trading

Ethereum’s crazy streak persists, with the ETH price breaking $4,000 for the first time.

The Pitfalls of Automated Trading and How to Avoid Them

What is the difference between crypto fundamental analysis and technical analysis?

What exactly is mining?

What exactly is a fork?

AKA reacts to allegations of ‘assault and drugs’ in his relationship with his late fiancée, Nelli Tembe, as images of him physically knocking down a bedroom door where she was hiding” surface.

Five people have been arrested as the NDLEA busts an online cocaine trafficking cartel in Abuja.

Rosy Meurer is greeted warmly by her husband, Olakunle Churchill, upon her return to Nigeria with their son (video)

Black Woman’s Immorality the western way: A married women posts a picture of herself posing for both her husband and her boyfriend.

Strange things are happening in this country: a new marriage law is being considered that would authorise women to marry more than one man.

Semi Ajayi is relegated after West Brom’s defeat to Arsenal.