Officers from the police explosive ordnance disposal team inspecting the remaining pieces of the WW2 US 105mm high explosive projectile that killed one person and injured three others in Honiara. May 2021 Photo: Royal Solomon Islands Police Force

A deadly blast in the Solomon Islands’ capital has raised concerns about the continued threat faced by World War II-era warheads.

A central Honiara residential area was rocked on Sunday by the detonation of a buried Howitzer shell which left one person dead and three others injured, two seriously.

The 101mm cannon round exploded in the Lengakiki area where the four youth members of the Kukum Seventh Day Adventist Church had been holding a fund-raising barbecue.

An elder from the church, Lloyd Tahani, said the open fire they were cooking on was directly above the shell.

“Maybe, because they had been cooking a long time, it triggered the bomb to explode,” mused Tahani.

He said the young man who was killed, who he identified as Raziv Hilly, “was hit directly” as he was cooking beneath a mango tree while the other three injured people were standing nearby.

The incident has left the people in Honiara shocked and scared, said Tahani.

“It brought fear to the residents in Honiara because, you know, Honiara is where the battle between Japan and the USA finishes,” he said referring to the 1942-43 Guadalcanal campaign.

“You just don’t have a comfortable environment when such things happen. People just feel that we don’t know whether a bomb is still sitting under your house or somewhere where you’re staying.”

Raziv Hilly was a leader in the Kukum SDA Church’s youth ministry, according to Tahani, who will be sadly missed.

And he was one of the country’s future leaders according to a member of the Solomons’ parliament.

Peter Kenilorea Jr, who knew Hilly and his family, said he was a much respected youth leader.

READ ALSO:  'Canary in the coal mine': Greenland ice has shrunk beyond return, study finds

“He was a very promising leader here in the Solomon Islands. He had a lot of respect,” said Kenilorea.

“He was one that had a lot of potential for us in the Solomons so it’s just sad to see him go this way. So the family is grieving at the moment and we send our love and our condolences.”

Hilly was also one of the country’s top aviation engineers whose loss is being mourned by his colleagues at the Ministry of Aviation and Communication, according to the Solomon Star.

The other three injured members of the church remain in hospital with one having received surgery on Monday for her serious injuries.

With Solomon Islands seeing some of the most intense conflict in WWII, the country remains littered with bombs, with hidden munitions an ongoing threat across the country.

The head of the police’s explosive ordnance disposal team, Clifford Tunuki, said they have responded to a number of unexploded ordnance (UXO) reports over the years in the capital.

Shrapnel from the blast that killed Raziv Hilly. It was found 300-400 metres away. Photo: RSIPF

“We keep a data base of the response we conducted and we have checked the history of that area,” said Tunuki, referring to Lengakiki.

“Our research indicates that it is no more contaminated with UXO than other parts of the capital.”

The last one was a mortar shell discovered in 2016, said Tunuki.

“Unfortunately citizens of Honiara can find a UXO anywhere and at any time of the year,” he added.

Last September, two members of a Norwegian NGO working on munitions recovery and disposal were killed when they removed ordnance into Honiara where they had been staying.

Tunuki said he could not comment on that case as the investigation into their deaths was still under way.

READ ALSO:  WHO sounds alarm as coronavirus cases rise by one million in five days

The United States, which along with Japan is responsible for most of the country’s UXO’s, said in a statement through its embassy in Papua New Guinea that it is “deeply saddened to hear of the tragic incident in Honiara this past weekend and mourn the loss of life.”

“The United States government, through our Department of Defense, will continue to support efforts to remove unexploded ordnance from Solomon Islands.

“Among these efforts is our ongoing partnership with Norwegian People’s Aid, which has worked in Solomon Islands since 2019 to identify and dispose of unexploded ordnance.”

But work by the Norwegian People’s Aid (NPA) was suspended last year following the deaths of the Australian and British team members in Honiara, according to Tunuki.

Previously, the Australian and New Zealand military had removed more than 1000 WWII era munitions as part of Operation Render Safe. 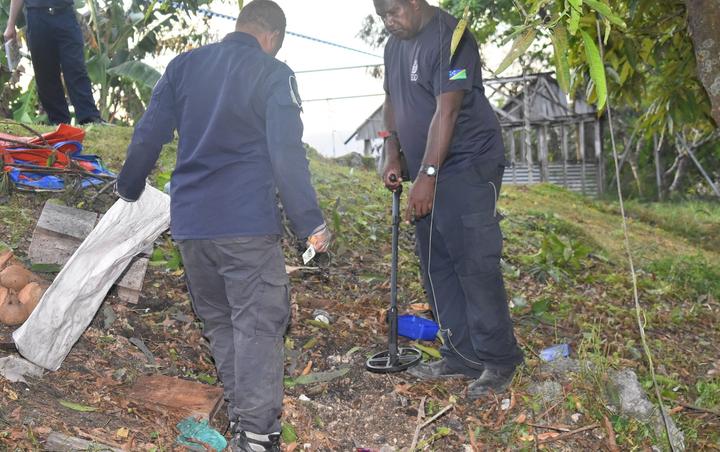 Meanwhile, the owners of the blast site have been ordered to contract a clearing firm because there aren’t enough police resources to search their property.

Tunuki claimed that the scene had been secured and that no further risks had been discovered.

However, he mentioned that the landowners have been instructed to employ a private clearing firm to inspect the surrounding grounds.

“The problem for us to clear populated areas, then we would need more manpower and resources than we currently have.

“Until then, we can only respond to the community reports that they have located UXO and then we attend to.”

Tunuki said there are more recruits being trained for that purpose.

According to Peter Kenilorea Jr., more information and understanding about the potential for UXOs underneath existing systems and in developed neighbourhoods could be needed.

New industrial developments are stripped of munitions, but residents do not hesitate to see them in the yards of existing houses, he says.

“I guess an increase of awareness needs to be done by authorities to alert people on the certain steps that they might need to take, even in an already established area, involving fires and then such,” Kenilorea said.

“I think such awareness needs to come back much more prominent in our discourse here in Honiara and Solomon Islands in general.”

‘Eighty percent of my lungs were injured,’ he says. The son of actor Pete Edochie recalls his COVID-19 experience.

‘Karma is real for every lie against you,’ Annie Idibia promises her mother amid filthy talk.

There is uproar as TB Joshua’s Prophets and Prophetesses list a private plane for sale, seize assets, and break into Church Vaults.

‘I am willing to date for ten years,’ says BBNaija. Nini’s

DJ Cuppy demonstrates her twerking abilities and explains why she is still unmarried.

MC Galaxy laments his inability to find a girlfriend.

Your village people are extremely powerful – Saga is being chastised by fans over his friendship with Nini.