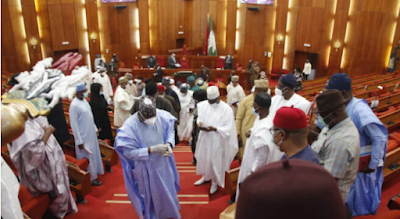 One of the nominees for the Economic and Financial Crimes Commission (EFCC) board, Yahaya Muhammad, is said to have started primary school before he was born.

In September, President Muhammadu Buhari asked the Senate to confirm Muhammad and four other nominees to the anti-graft agency’s board of directors.

While presenting his report for the consideration of the senate on Tuesday, Kwari Sulieman, chairman of the senate on anti-corruption and financial crimes committee, said all the nominees met the necessary requirements to hold public office.

But Hassan Hadejia, senator representing Jigawa north-east, drew the attention of the senate to what he described as “discrepancies” in Muhammad’s credentials.

Hadejia said according to the nominee’s credentials, he started school a year before he was born.

“One of the nominees, Alhaji Yahaya Muhammad — according to the record before us, started his primary school before he was born,” the senator said.

“There is also an overlap in the sequence of his educational experience because here, he was born on 29th of September, 1969 and he started his primary school in 1968.

“He was in Borno Teachers College from 1975 and 1988 while simultaneously he was in the college of administration studies from 1980 to 1981.”

However, Muhammad was confirmed after his nomination was put to a voice vote by Ovie Omo-Agege, deputy senate president.