That Debate Was a Bucket of Warm You-Know-What

What was hailed as the most important vice presidential debate ever simply wasn’t. 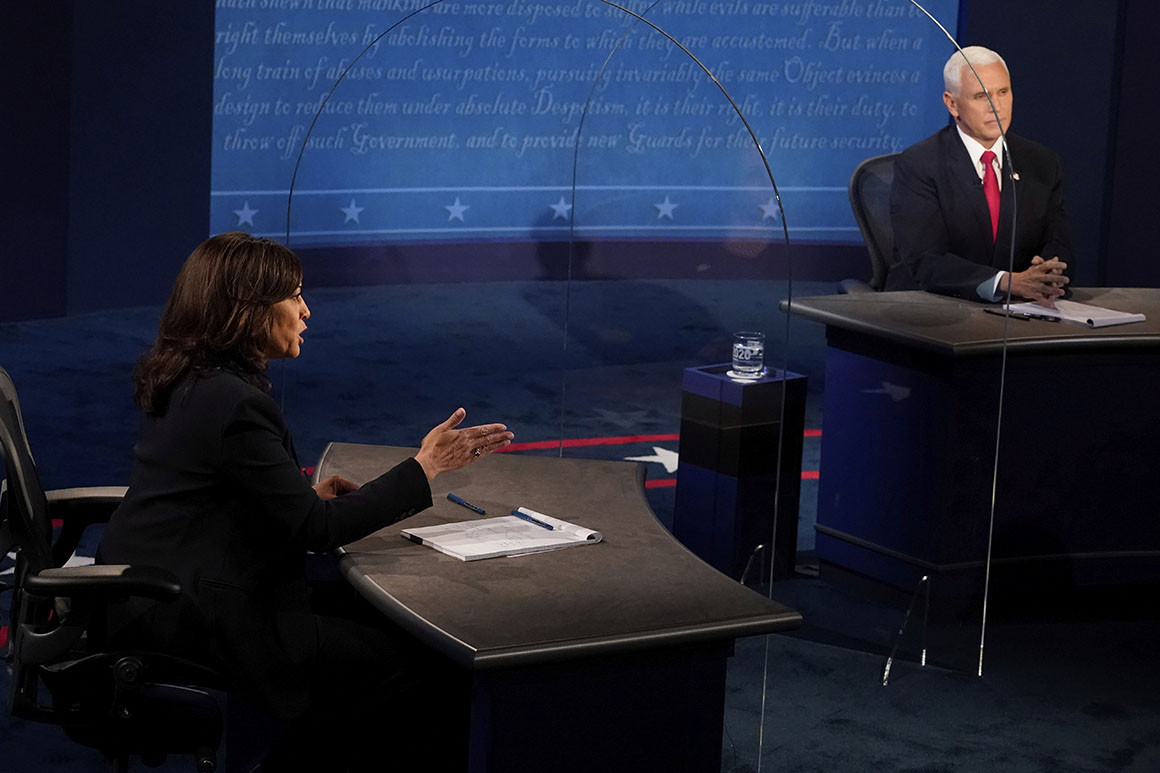 Better pay extra-close attention to Kamala Harris and Mike Pence was the prevailing theme before Wednesday night’s vice presidential debate, because this time it could really matter. The age and possible infirmity of two presidential nominees in their seventies would supposedly infuse this clash of running mates with special gravity.

That was a valiant effort at pre-game hype, but it was quickly demolished by the reality of the encounter. Neither Vice President Pence nor Senator Harris could escape the fundamental dynamic of the job they are seeking: The vice presidency is by definition minimizing.

Even in this most unfamiliar of years, this familiar optical phenomenon worked the way it always does in clashes between those in the second spots of the national tickets. The arguments and tone made it obvious always that these were two surrogates—people who have subordinated their own personas in pursuit of some combination of public service and personal ambition—and not two principals.The exchanges were often crabby and sometimes brittle, but they stayed firmly on the rails, in contrast to the raucous crack-up of the first 2020 presidential debate eight days earlier. Pence seemed occasionally to be trying but proved that he is simply not in President Donald Trump’s league when it comes to interrupting or ignoring an exasperated moderator’s plea to follow the rules and stop talking.Unlike the incoherence of the debate between President Donald Trump and former Vice President Joe Biden, this debate arguably did illuminate a contrast of ideology and priorities. Harris scored the administration’s coronavirus response, which has led to more than 200,000 deaths, while Pence said that number is far better than predictions as high as two million in the early stages of the pandemic. He said he’s proud of his and Trump’s position against abortion rights and said the administration fights for economic growth and pushes back against environmental extremism. She defended the Affordable Care Act and warned that Trump’s plans, if he had his way, would destroy protections for people with pre-existing medical conditions.Yes, the vice presidency has a constitutional status, but in essence the debate was not really any different than a cable segment featuring dueling press secretaries from the opposing campaigns. If people were looking for a window into what Pence and Harris would be like as presidents themselves, they would only be satisfied if their hope was for a president who praises the person who selected him or her, and who answers questions with rehearsed lines that often are barely or not at all responsive to what is asked.It is hard to see—Wait, is that fly on our screen at home? No, it is actually on Pence’s hair isn’t it? Beg your pardon. As we were saying, it is hard to see how this vice presidential debate could consequentially alter the main trajectory of the race or the underlying reputations of the running mates. Neither of the candidates claimed to know Jack Kennedy, and neither looks like a near-term prospect as being the next Jack Kennedy. One of the most famous quotes about the vice presidency—not as famous as the one from Vice President John Nance Garner about the job as “not worth a bucket of warm piss”—was from the first person to hold the job, John Adams: “I am vice president. In this I am nothing, but I may be everything.”

No vice president in modern times has been nothing. The office has steadily expanded in staff, and usually in governing influence, although that is always granted or ignored at the discretion of the president. But in terms of presence in the public imagination running mates still tend to be closer to the nothing end of the spectrum than the everything end.

Even people who arrive in the vice presidency with formidable previous achievements and public profiles, from Lyndon Johnson to Nelson Rockefeller to Biden himself—tend to shrivel in their public personas. It is the nature of the job and the bargain that people accept to be close to power and to instantly gain status as more likely than anyone else actually to become president himself or herself. Pence was previously a governor, and Harris is a senator from the nation’s largest state. Both are fluent speakers who had no trouble occupying the stage. But neither, in the number two role, naturally invited commentary on the lines of, “Why isn’t that person at the top of the ticket?”

Harris didn’t respond to Pence’s reminders that she had once proposed a ban on natural gas “fracking,” and simply repeated that Biden doesn’t support a ban on fracking. That is in keeping with what running mates are supposed to do, but it served to underscore a reality: My independent views don’t matter anymore, except possibly in private if I don’t get crossways with the president. Pence understands that reality, and has lived by it, more than anyone.

On social media during the debate, and on television news analysis afterward, a preoccupying question was what was up with Pence’s long answers, interjections to Harris’ answers, and refusal to defer to moderator Susan Page of USA Today in her increasingly impatient attempts to get him to wrap up. Page began the evening reminding people that the campaigns had agreed to the rules with the Commission on Presidential Debates and serving stern notice that, “I’m here to enforce them.” But she frequently labored to do so. Her technique was to keep repeating “thank you, thank you,” dozens of times during the evening. Pence acted as if she was literally expressing gratitude for his words and so he was going to keep going with more. It was an aggressiveness that seemed in tension with his generally mild-mannered demeanor in public.

On ABC News afterward, host George Stephanopoulos wondered if this came off as “mansplaining.” His colleague Martha Raddatz wasn’t buying it, and said at the level Harris is now playing at it is not a question of whether someone is trying to condescend to her but whether she has the strength to brush that off and take command of the stage herself.

One possibility was that Pence was acting the way he did in order to avoid mansplaining—directed at him, delivered by Trump, once the debate is over. If that did happen, it is the nature of the job Pence has, and wants to keep, that he has little choice except to take it.