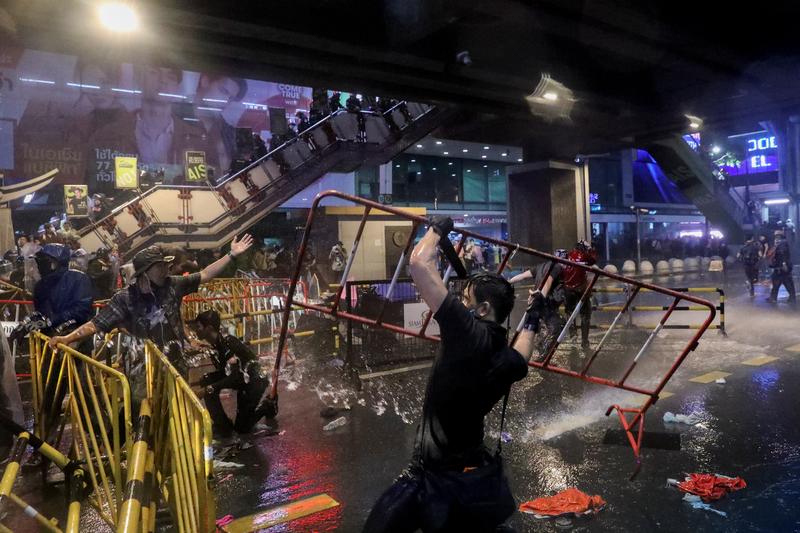 Thai police fired stinging liquid from water cannon at thousands of protesters on Friday in the most violent escalation of three months of demonstrations against the government of Prime Minister Prayuth Chan-ocha, a former junta leader.

Protesters, defying a government ban on gatherings for a second day in Bangkok, pushed back against helmeted police who advanced with batons and riot shields. In scenes resembling Hong Kong protests, demonstrators held umbrellas against the water.

Youth-led protests have grown into the biggest challenge in years to a political establishment dominated by military figures and the Royal Palace of King Maha Vajiralongkorn.

“The dictatorial government is using violence to disperse the people’s movement,” said Tattep Ruangprapaikitseree, one of the protest leaders. He was arrested hours later, along with six other protesters, police said.

The king has made no direct comment on the protests, but in comments broadcast on state television, he said Thailand “needs people who love the country and love the monarchy”.

Until now, police had not used major force to suppress peaceful protests that have drawn tens of thousands of people, although around 50 demonstrators – including several leaders – have been arrested in the past week.

A journalist for online media Prachatai was arrested live on air, the independent outlet said.

The government banned political gatherings of more than five people on Thursday and police spokesman Kissana Phathanacharoen defended the use of water cannon as proportionate. The chemicals in the water were not dangerous, he said.

“The police abided by international standards to disperse the demonstration,” he told a news conference.

Organisers told protesters to disperse more than three hours after they gathered.

“I am not afraid for myself. I fear more for the future of the country,” said one protester Poom, 31, who did not want to give his full name.

Protests were reported from provinces across Thailand in reaction. A demonstration sprang up at a university campus outside Bangkok and police faced off with another group of people on a city road.

Prayuth first took power as army chief in a 2014 coup. Critics say he engineered a general election last year to keep hold of power as a civilian prime minister.

He says the election was fair.

Protesters also want a new constitution, to replace one drafted under military rule.

“I’m not quitting,” Prayuth told reporters after an emergency cabinet meeting, adding that emergency measures would be in force for up to 30 days.

Calls have also built up among protesters for reforms to the monarchy, which is accused by protesters of helping to entrench decades of military influence in politics.

The only specific incident cited by the government for the imposition of emergency measures was one in which Queen Suthida’s motorcade was jeered, but it also said protests were damaging the economy and national security.

Police said on Friday that two men would be charged with attempted violence against the queen, which carries a possible death sentence if her life is thought to have been threatened. Even if not, the charge can mean life in jail.

The office of the United Nations’ High Commissioner for Human Rights said it was concerned about the situation in Thailand, especially the application of serious charges against people peacefully exercising their rights.

Thai parliamentary opposition parties condemned the emergency measures and the “excessive action from the government in dispersing the demonstration.”

“The use of force to suppress the protest adds fuel to the fire of hatred and increases the crisis of faith,” six parties said in a statement.