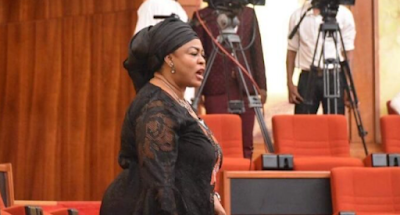 This was revealed in the Pandora Papers project, which Premium Times is a part of and is led by the International Consortium of Investigative Journalists (ICIJ).

According to Premium Times, leaked documents showed that Oduah acquired the said properties through an offshore company between 2011 and 2014. The report revealed Oduah as the owner of International Trading and Logistics Company Limited (ITCL) which was incorporated in Seychelles.

Oduah reportedly used the offshore ITCL to acquire the properties worth £6.7 million between October 2012 and August 2013.

“Records show that none of the four properties was bought with mortgage financing, meaning Ms Oduah routed 6.7 million pounds through her offshore company to anonymously effect the acquisitions,” the paper said.

“Ms Oduah’s houses are among the 234 UK properties our investigation showed were anonymously acquired by offshore companies, with Nigerians as ultimate beneficial owners.”

According to the paper, using the Seychelles-incorporated company would enable the former minister to avoid checks by the UK about the sources of her funds and also “avoid possible investigation and prosecution in Nigeria for owning undeclared assets or acquiring them as a public servant”.

According to the report, a total of seven London properties are connected to Oduah. She was said to have purchased one in 2006 before she became a minister; two through her Nigerian-incorporated ITCL in 2011, and the last four acquired through her Seychelles offshore ITCL between 2012 and 2013.

The newspaper said it is unclear how Oduah raised the funds to purchase the properties or if she declared them to the Code of Conduct Bureau (CCB) while she was a minister. It added that evidence showed that she retained her directorship of the offshore company while holding public office.

Earlier in the year, the former minister was billed to be arraigned by the Economic and Financial Crimes Commission (EFCC) alongside eight others for alleged financial fraud. The EFCC had alleged that Oduah misappropriated public funds while serving as a minister.

In July, a federal high court in Abuja threatened to issue a warrant of arrest on the former minister over her continuous absence in court.

One month later, Oduah defected from the Peoples Democratic Party (PDP) and joined the ruling All Progressive Congress (APC).