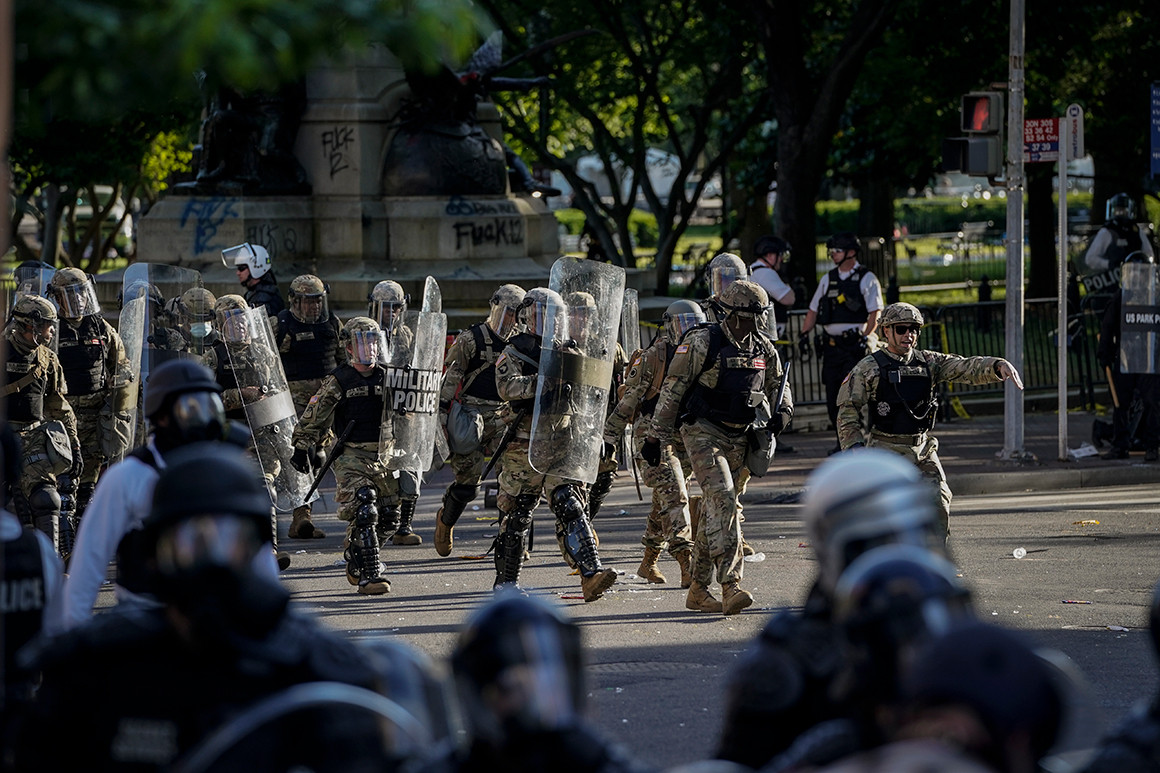 President Donald Trump faced withering criticism in the hours after spurring a violent incursion against apparently peaceful protesters for the purposes of staging a political photo opportunity — provoking rebukes Tuesday from local and state executives, congressional lawmakers, faith leaders and even foreign governments over the extraordinary show of force amid converging national crises.

Washington Mayor Muriel Bowser revealed officials within her office were “very shocked and, quite frankly, outraged” by the aggressive dispersal of crowds demonstrating outside the White House on Monday evening, facilitated by police officers and National Guard troops firing rubber bullets and deploying flash-bang grenades.

The mayor insisted no officers with the Metropolitan Police Department were involved in the effort to force protesters from Lafayette Square and the surrounding area. The park was cleared nearly an hour before Washington’s 7 p.m. curfew was to go into effect in order to open a path for Trump, top White House aides and senior administration officials to venture across the street to historic St. John’s Episcopal Church.

Prominent members of the Christian clergy in the United States similarly condemned Trump’s decision to then pose with a Bible outside the so-called Church of the Presidents, which had been partly damaged by a basement fire during protests during the weekend.

The president hoisted the holy book “as if it were spiritual validation and justification for a message that is antithetical to the teachings of Jesus and to the God of justice,” the Right Rev. Mariann Edgar Budde, bishop of the Episcopal Diocese of Washington, told ABC News.

Jesuit priest James Martin argued on CNN that the use of violence “to remove peacemakers from in front of the church — so you can hold up a Bible and say how great America is while you’re promising military action against peaceful protesters — seems to me to be the complete opposite of what Jesus taught.”

Ahead of Trump’s scheduled visit Tuesday to the Saint John Paul II National Shrine, Washington Archbishop Wilton Gregory called it “baffling and reprehensible that any Catholic facility would allow itself to be so egregiously misused and manipulated in a fashion that violates our religious principles.”

The late pope, Gregory said in his statement, “was an ardent defender of the rights and dignity of human beings,” and “certainly would not condone the use of tear gas and other deterrents to silence, scatter or intimidate them for a photo opportunity in front of a place of worship and peace.”

The president has repeatedly advocated for a reinforced law enforcement presence, including the deployment of the National Guard, in states to quash the increasingly volatile protests that have spread across the country since George Floyd, a 46-year-old black man, died in Minneapolis police custody last week.

Trump encouraged America’s governors on a conference call Monday to “dominate” cities ravaged by lootings and riots, and threatened later that evening at the White House to call on the military to put an end to the nationwide wave of racial unrest if state and local officials refused to activate the National Guard.

Illinois Gov. J.B. Pritzker, who objected to the president’s comments on the call, declared Tuesday he would “reject” any attempt by Trump to foist a military presence upon his state, and warned that such a maneuver by the commander in chief would be met with a legal challenge.

“He does not have the ability to send troops in without being called on by the states to do it,” Pritzker told MSNBC. “I don’t know any governor that’s going to call on the federal government, federal troops enter their state. We don’t need that.”

Michigan Gov. Gretchen Whitmer appeared uninterested in debating the finer points of a potential constitutional clash between her office and the federal government, should Trump move to send troops to her state.

READ ALSO:  Places of worship 'may not be safe' for some, Birx says

She told MSNBC that “division” from the White House and “threats of military [force]” were unhelpful in solving the myriad problems at hand, and said she would not “make decisions based on threats to be bullied or tweets or anything other than what I know to be the right thing to do on behalf of the people of the state,” Whitmer said.

“When peaceful protesters [are] dispersed in order for a president — a president — from the doorstep of the ‘People’s House’ — the White House — using tear gas and flash grenades in order to stage a photo op — a photo op — on one of the most historic churches in the country, or at least in Washington, D.C., we can be forgiven for believing the president is more interested in power than in principle,” Biden said. “More interested in serving the passions of his base than the needs of the people in his care.”

The presumptive Democratic presidential nominee added that although Trump “held up the Bible at St. John’s Church yesterday, I just wish he opened it once in a while instead of brandishing it. If he opened it, he could have learned something.”

The objections Tuesday to Trump’s posturing outside the house of worship were bipartisan, with two Republican senators lodging rare statements of disapproval of the president.

“There is no right to riot, no right to destroy others’ property, and no right to throw rocks at police,” said Nebraska Sen. Ben Sasse. “But there is a fundamental — a constitutional — right to protest, and I’m against clearing out a peaceful protest for a photo op that treats the Word of God as a political prop.”

South Carolina Sen. Tim Scott told POLITICO he did not “personally” witness the “tear gas situation and the moment with the Bible,” but said “it’s not something that I thought was helpful or what I would do, without any question.” He added that, “obviously, if your question is, ‘Should you use tear gas to clear a path so the president can go have a photo-op?’ The answer is no.”

Monday’s violence in the nation’s capital reverberated outside the realm of domestic politics, denting diplomatic relations with a longtime international ally, as well.

Australian Minister for Foreign Affairs Marise Payne confirmed Tuesday the country’s government had asked its embassy in Washington to investigate the charging of an Australian news crew by American officers outfitted in riot gear, urging “all involved on both sides” of the U.S. protests “to exercise restraint and to avoid violence.”

Despite the various fallout, the White House remained unrepentant, and posted from its official Twitter account early Tuesday morning a high-polish video of the president’s brief visit to St. John’s.

Later in the afternoon, the president pinned a new message to the top of his preferred social media feed that included a brazen assertion and a list of his administration’s perceived accomplishments on behalf of African Americans.

“My Admin has done more for the Black Community than any President since Abraham Lincoln,” he wrote, concluding that “THE BEST IS YET TO COME!”