Azerbaijan and Armenia accused each other of serious violations and crimes against civilians, and Azerbaijan also said it had launched airstrikes as a day-old humanitarian ceasefire in Nagorno-Karabakh looked increasingly frayed on Sunday. 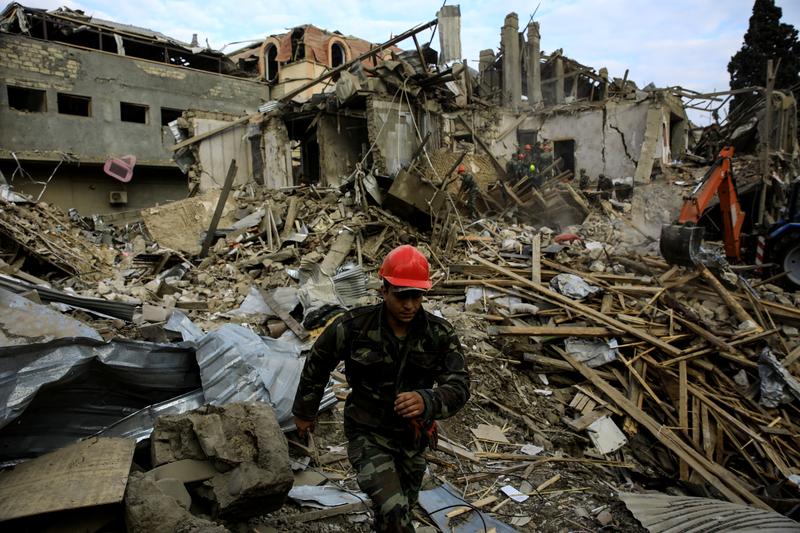 The Russian-brokered ceasefire, clinched after marathon talks in Moscow, was meant to halt fighting to allow ethnic Armenian forces in Nagorno-Karabakh and Azeri forces to swap prisoners and war dead.

The talks were the first diplomatic contact between the two since fighting over the mountainous enclave erupted on Sept. 27, killing hundreds of people. Nagorno-Karabakh is internationally recognised as part of Azerbaijan, but is populated and governed by ethnic Armenians.

Both sides accused one another of breaking the ceasefire almost immediately, and Azerbaijan gave the impression in public comments from top officials that it saw it as only a brief breathing space anyway.

Azerbaijan, making the first claim of an attack since the truce, said on Sunday it had carried out airstrikes against an ethnic Armenian regiment, inflicting heavy losses. Reuters could not independently verify that claim.

A spokesman for the leader of Nagorno-Karabakh told Reuters he did not have information about the alleged attack.

Earlier on Sunday, Azerbaijan accused Armenia of heavily shelling a residential area in Ganja, its second largest city, in the early hours of the morning, and of hitting an apartment building.

The Azeri Prosecutor General’s Office said nine people had been killed and 34 wounded in the attack. Reuters could not independently verify Azeri assertions about the number of deaths or injuries.

A Reuters photographer in Ganja saw rescue workers carrying one dead person from the ruins of the apartment building on Sunday morning. The structure had been almost levelled. An excavator was clearing the debris.

Buildings and cars in the immediate vicinity had also been severely damaged.

Baku says more than 40 civilians have been killed and 200 injured since the start of the conflict.

The Armenian defence ministry called the Azeri allegations about the attack on Ganja “an absolute lie” and accused Azerbaijan of continuing to shell populated areas inside Karabakh, including Stepanakert, the region’s biggest city.

Reuters footage from Stepanakert showed a small brick house damaged by shelling, its windows shattered and its roof caved in. The Karabakh authorities said at least five civilians had been killed since the ceasefire was supposed to take effect on Saturday and that 429 servicemen had been killed since fighting erupted last month.

Arayik Haratyunyan, the leader of ethnic Armenian forces in Nagorno-Karabakh, early on Sunday described the overall situation as relatively calm, but said he did not know how long it would last and that the frontline remained tense.

He accused Azeri forces of trying to unsuccessfully take control of the town of Hadrut, and said the process of the two sides exchanging prisoners should have started on Sunday, but that it was unclear if and when that would happen.

Renewed fighting in the decades-old conflict has raised fears of a wider war drawing in Turkey, a close ally of Azerbaijan, and Russia, which has a defence pact with Armenia.

Turkish Foreign Minister Mevlut Cavusoglu asked his Russian counterpart Sergei Lavrov in a phone call on Sunday to press Armenia to abide by the terms of the truce, Turkey’s foreign ministry said.

Armenia’s foreign minister was due in Moscow on Monday for talks with officials from the Organization for Security and Cooperation in Europe’s (OSCE) Minsk group led by France, Russia and the United States.

The fighting is the worst since a 1991-94 war that killed about 30,000 people and ended with a ceasefire that has been violated repeatedly.

READ ALSO:  Teenager is bitten on the pen!s by a snake while sitting on the toilet
Armenia Asia Azerbaijan

The Best New Shows to Watch from FOX’s Fall Lineup

Demi Lovato: I had a ‘beautiful’ encounter with aliens in Joshua Tree