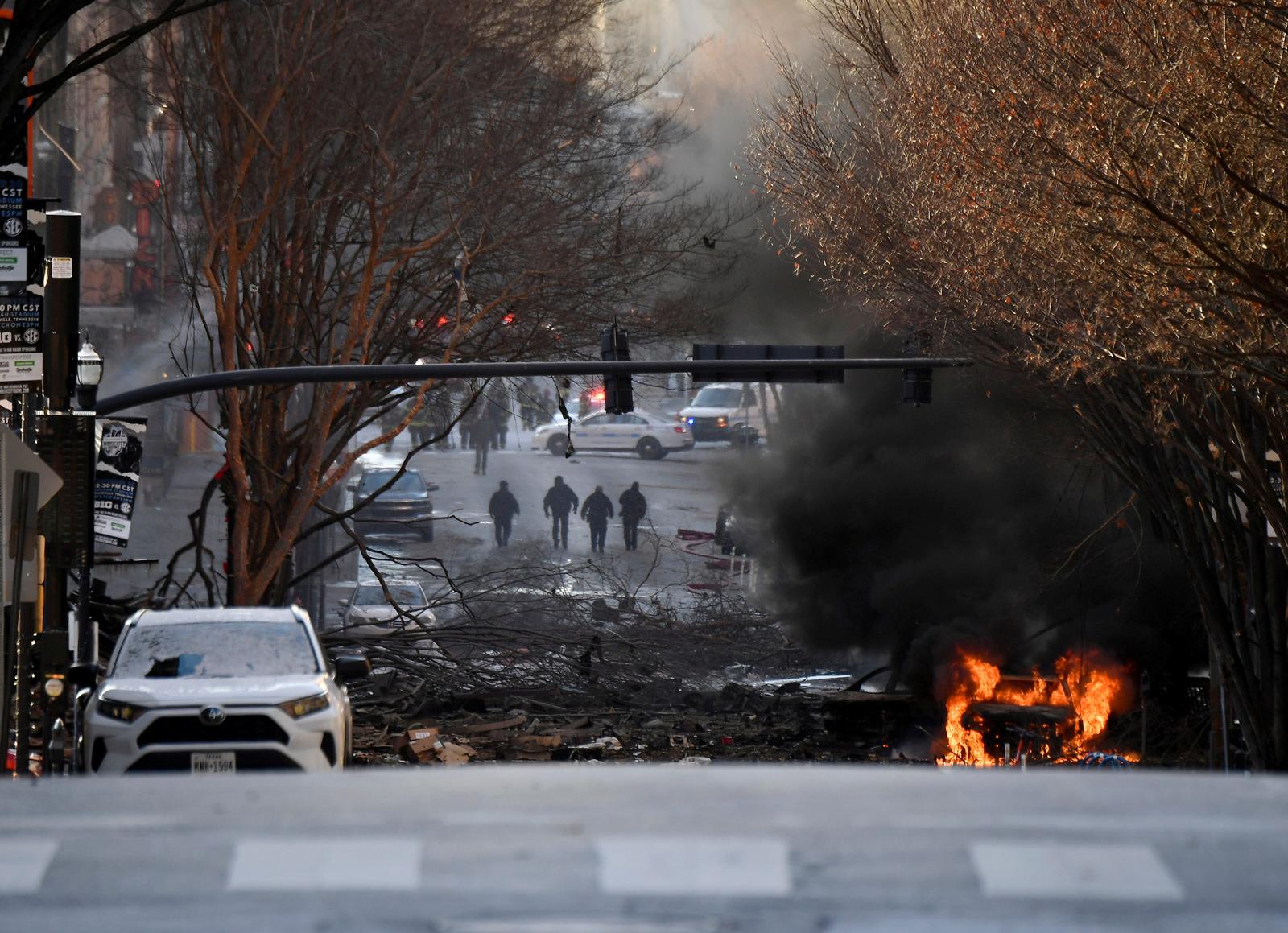 A motor home parked on a street exploded in downtown Nashville at dawn on Friday, moments after a recorded message emanating from the vehicle warned of a bomb, in what police called an “intentional act” in the heart of America’s country music capital.

Three people were injured in the Christmas morning blast, though none critically. Authorities said it was uncertain whether anyone was inside the recreational vehicle when it exploded, but police reported hours later that investigators had found possible human remains nearby.

Nashville Mayor John Cooper ordered a curfew imposed around the blast site through the holiday weekend as FBI investigators comb the scene, though police said they were aware of no further threats to Tennessee’s most populous city.

Authorities offered no explanation as to a possible motive, and there was no claim of responsibility.

The blast came just moments after officers responded to reports of gunfire in the area and discovered the recreational vehicle parked outside an AT&T building in downtown Nashville at about 6 a.m. CST (1200 GMT).

Officers quickly went door-to-door in nearby buildings to hustle people to safety, and called for dispatch of the police bomb squad, which was on its way to the scene when the vehicle blew up, police spokesman Don Aaron said.

The Metro Nashville Police Department posted a photo of the recreational vehicle on its Twitter feed and said that the vehicle had arrived in the area at 1:22 a.m.

An area resident, Betsy Williams, told CNN that she was awakened by the sound of gunfire and looked out her window to see an RV parked across the street as it began playing a message delivered by a “computerized” female voice. She said the voice warned the vehicle contained a bomb and started a minute-by-minute countdown to the actual explosion.

“Everything shook, it was quite a blast,” she told CNN.

The fiery blast destroyed a number of other vehicles parked nearby, shattered windows and heavily damaged several adjacent buildings, sending a pall of black smoke into the sky that could be seen for miles. The mayor said a total of 41 businesses were damaged.

Fire officials said three people were taken to local hospitals with relatively minor injuries, and they were listed in stable condition. Authorities said quick action by police to begin evacuating the area before the blast likely prevented more casualties.

“Obviously, they heard the announcements coming from this vehicle,” Aaron told reporters. “They took them seriously. And worked to seal the streets to protect folks and we think it worked.” He called the blast “an intentional act.”

Shops and other buildings were closed given the early hour of the day, the Christmas holiday and prevailing COVID-19 restrictions on public gatherings, also helping to keep injuries to a minimum.

At an early evening briefing, Drake, the police chief, told reporters there were “no fatalities we know of,” but said investigators were examining “tissue that we believe could be human remains” found in the vicinity of the blast.

Police said they had not ascertained whether anyone was in the motor home when it exploded.

Damage to AT&T facilities from the explosion caused widespread disruptions of telephone, internet and fiber optic TV service in central Tennessee and parts of several neighboring states, including Mississippi, Kentucky, Alabama and Georgia, the company said.

Drake said authorities had received no threats of an attack prior to the reports of gunfire at the outset of the incident, describing the blast as a “total surprise.”

“We had no pre-warnings at all,” he said.

The explosion occurred about two blocks from Lower Broadway, where some of Nashville’s famous live music venues are located. The Ryman Auditorium, former home of the Grand Ole Opry and just three blocks from the blast scene, was undamaged. The Gaylord Opryland and current Grand Ole Opry complexes, which sit outside the downtown area, were not impacted.

“It’s a startling thing to have it happen in Nashville so close, and on Christmas, but we understand that America is in very tumultuous times right now,” country singer John Rich, who owns a honky-tonk club a block from the explosion, told Reuters.

The blast could be heard for miles and was felt at least nine blocks away, knocking one officer off his feet, Aaron said.

Agents from the Federal Bureau of Investigation and the U.S. Bureau of Alcohol, Tobacco, Firearms and Explosives were assisting in the probe, agency officials said.

Nashville’s vice mayor, Jim Shulman, told CNN the incident appeared to have been a solitary act, though bomb-sniffing dogs were being led through the downtown area as a precaution.