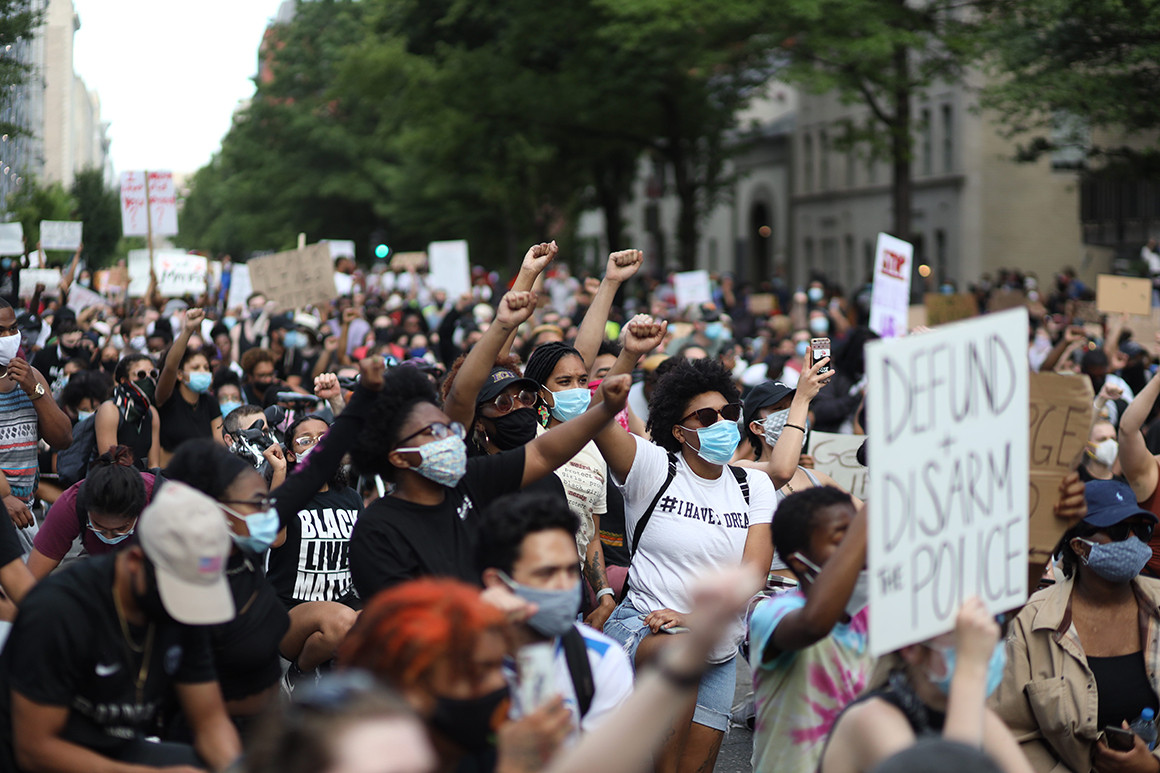 A trio of black mayors on Sunday called for Americans outraged by George Floyd’s death to protest peacefully, decrying the violent eruptions that are destroying communities already devastated by a deadly virus.

Protests have spread from Minneapolis, where a white police officer was fired and charged with third-degree murder last week after a bystander recorded him kneeling on a 46-year-old black man’s neck, to cities across the nation.

But what began as peaceful demonstrations calling for justice after yet another high-profile killing of an unarmed African American citizen by a white police officer has descended into chaos, with violent clashes between protesters and police, as well as the burning of buildings and widespread looting.

“We are seeing in St. Paul and obviously around the country, Jake, this level of rage and anger that frankly is legitimate,” St. Paul Mayor Melvin Carter told CNN’s Jake Tapper on “State of the Union.” “The rage out there is predictable, it’s understandable and it’s legitimate. Unfortunately, it’s being expressed right now, over the past week, in ways that are destructive and unacceptable.”

More than 170 businesses have been damaged in St. Paul, and nearly 160 people were arrested Saturday in Atlanta. The city’s mayor, Keisha Lance Bottoms, told CBS’ Margaret Brennan on “Face the Nation” that it’s peaceful protests that have a history of bringing change to America.

“But it has to be organized, and it has to be for a purpose,” she said. “And when you have violent eruptions like we’ve seen across America, then we lose sight of even what we are talking about.”

In a separate interview with Tapper, Bottoms lamented that Saturday’s violence took the focus off Floyd, Ahmaud Arbery and Breonna Taylor — Arbery was jogging in a Georgia neighborhood when he was confronted and killed by two white men in February, and Taylor was fatally shot inside her home by Louisville police officers in March.

“We need to get back to what the problem is, and that’s the killing of unarmed black people in America,” Bottoms said. “And there is a history lesson that we find right here in Atlanta from the civil rights movement on how you effectuate change. And what I saw happening and what we’ve seen happening over the past few days in America is not the way that things will change in this country.”

The growing unrest comes amid heightened racial tensions and as millions of Americans are still reeling from the effects of the novel coronavirus, which has disproportionately impacted people of color. Covid-19 has infected more than 1.7 million Americans and killed more than 103,000 people in the U.S. The virus has also put more than 40 million Americans out of work, forcing leaders to delicately balance saving lives and saving the economy with phased reopenings.

The recently ignited protests also pit First Amendment protections against public health recommendations, forcing some people to choose between their constitutional right to protest and their responsibility to protect themselves and their families from a virus that can be spread by people who carry no symptoms.

“And that’s frightening, because it’s a pandemic and people of color are getting hit harder,” she said. “I am extremely concerned when we are seeing mass gatherings. We know what’s already happening in our community with this virus. We’re gonna see the other side of this in a couple of weeks.”

Maryland Gov. Larry Hogan, who chairs the National Governors Association, said he and other leaders across the country are concerned that the virus could spread through protesters.

“Right now the immediate concern is to lower the temperature, stop the looting and potentially keep our citizens safe from the riots that are going on, but the next step is to worry about what we’ve been focused on for the past couple of months, the safety in dealing with this coronavirus,” he said. “There’s no question that when you put hundreds or thousands of people together in close proximity when we’ve got this virus all over the streets, it’s not healthy. There’s about a 14-day incubation period, so two weeks from now across America we’re gonna find out whether or not this gives us a spike and drives the numbers back up again or not.”

Washington, D.C., Mayor Muriel Bowser told Chuck Todd on NBC’s “Meet the Press” that the city was “sending a very clear message to people that they have a right to exercise their First Amendment rights but not to destroy our city.”

“We saw a level of just destruction and mayhem among some that was maddening,” Bowser said. “Our crews are out right now cleaning up our city, and we are working with all of our law enforcement partners to ensure calm in our city.”

On Sunday evening, Bowser announced a citywide curfew that would go into effect at 11 p.m. and end at 6 a.m. Monday. She also activated the D.C. National Guard to support local police officers.

President Donald Trump warned over the weekend that any protesters who infiltrated White House grounds would’ve been met “with the most vicious dogs, and most ominous weapons.” On Friday, Twitter said one of the president’s posts “glorified violence.” The tweet called demonstrators in Minneapolis “THUGS” and invoked a former white Miami police chief who once said, “When the looting starts, the shooting starts.”

Bowser said Trump “has a responsibility to help calm the nation.” “He can start by not sending divisive tweets that are meant to hearken to the segregationist past of our country,” she said.

At least two dozen cities have set curfews this weekend to limit violence, and the National Guard has activated roughly 5,000 troops in 15 states and Washington, D.C., to assist local law enforcement, as of Sunday morning.

Trump on Sunday congratulated the National Guard “for the great job they did immediately upon arriving in Minneapolis, Minnesota, last night.” He has blamed Mayor Jacob Frey of Minneapolis for the city’s failure to shut down left-wing “anarchists,” tweeting on Saturday that Frey should “Get tough and fight (and arrest the bad ones)” and announcing on Sunday that the U.S. would designate Antifa as a terrorist organization. Antifa, however, is a domestic direct-action protest movement, not a centralized organization, and the president doesn’t appear to have the legal authority to make such a designation.

Attorney General William Barr later said legitimate protests had been “hijacked” by “outside radicals and agitators” who are leveraging demonstrations as an opportunity “to pursue their own separate, violent and extremist agenda.”

“The violence instigated and carried out by Antifa and other similar groups in connection with the rioting is domestic terrorism and will be treated accordingly,” he said in a statement.

Robert O’Brien, the president’s national security adviser, declined to say whether Trump would deliver a national address but argued that he has been accessible through his Twitter account. Speaking on “State of the Union,” O’Brien hailed peaceful protesters as “part of the great American tradition” but condemned violent demonstrators, arguing that it’s left-wing activists who are “throwing bricks,” “burning down our cities and attacking the most vulnerable minority communities.”

He said he hadn’t seen reports of far-right groups that may be using the protests to start a race war and also denied that systemic racism was a problem in law enforcement.

“I think 99.9 percent of our law enforcement officers are great Americans, and many of them are African American, Hispanic, Asian,” he said, adding that some are “bad apples” that need to be rooted out.

O’Brien’s comments put him at odds with the mayors, who suggested that protesters from their cities weren’t entirely responsible for the destruction and violence.

Carter said there are people in St. Paul who are only there to burn down minority businesses, and Bottoms said Atlanta’s demonstrations “didn’t look like our normal protests,” noting that organizers told her they didn’t know who some of the people were or where they came from.

Carter also dismissed the notion that the Minneapolis police officer was just one “bad apple.”

“If it was just one, you might be able to say, ‘Rogue officer, bad apple.’ But when you have four officers in the video all responsible for the taking of George Floyd’s life, it points to a normalized culture that’s accepted — that’s been accepted — and that cannot be a part of our culture moving forward,” Carter said.

“What we’re calling for right now is peace. We’re asking our folks to protest peacefully, to scream from the top of their lungs that this can never happen again and that not just one but all four of those officers must be held accountable,” he said.

Carter also emphasized that he’s asking for peace, not patience.

Ripple has sold $15M of its stock in MoneyGram

What Is a CBDC?