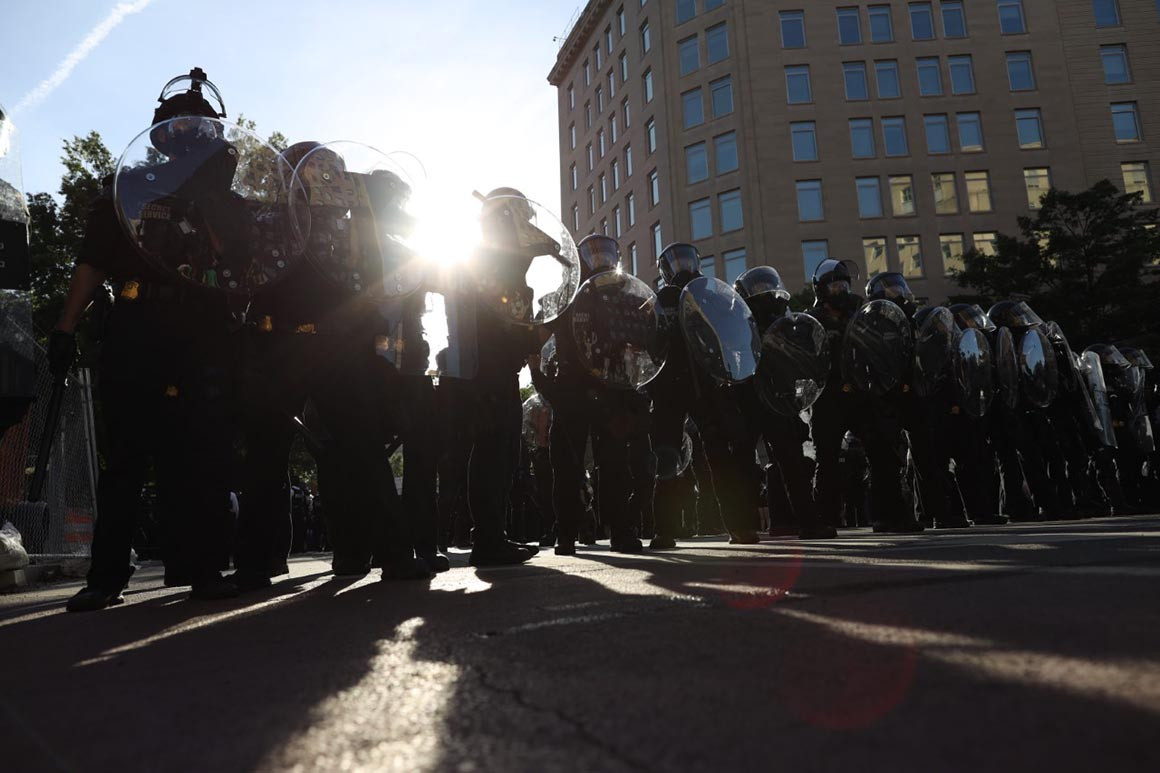 Election officials will have to grapple with that very challenge Tuesday, when voters in nine states and the District of Columbia vote by mail or head to the polls for primaries. Several cities set to hold an election have seen massive protests, at times spiraling into looting and violence.

With widespread curfews keeping residents in their homes and some ballot-return locations shuttered, some voters could end up disenfranchised, voting rights activists warned.

“We are particularly concerned about how the protests, and particularly the response to the protests, are going to affect voting,” said Suzanne Almeida, the interim executive director of Common Cause Pennsylvania. She cited two particular stress points: curfews and an increased police presence.

“If you look at the genesis of the protest that we saw over the weekend, it is police violence toward people of color,” Almeida said. “Then asking people to walk through, or near, or around police or National Guard who are armed can feel dangerous. Particularly voters of color, but other voters as well.”

Curfews in cities could also pose a barrier, when they press against or overlap with time set aside for voting. Philadelphia’s curfew for Monday night starts at 6 p.m. and ends at 6 a.m. on Tuesday, an hour before polls are set to open. Mayor Jim Kenney’s office announced it will begin enforcing a curfew at 8:30 p.m. on Tuesday evening, a half-hour after polls close.

Philadelphia isn’t the only city that could see voting affected by the unrest. In Washington, D.C., Mayor Muriel Bowser announced there would be a citywide curfew starting at 7 p.m. on Monday and Tuesday, which intersects with early, in-person voting on Monday and Election Day voting on Tuesday.

Bowser said voters will be exempt from the curfew.

“Voting is essential, therefore D.C. residents voting will be exempt to the curfew,” Susana Castillo, a spokesperson for Bowser, said in an email. Castillo did not respond to follow-up questions on what steps the government of the plurality-black city will take to ensure that voters traveling to or from their polling place are not subject to the curfew, or whether voters will have to provide proof they actually voted.

“I’ve sent you all the information I have at this time. Whatever you learn from the Mayor’s office should suffice,” Rachel Coll, a public information officer for the city Board of Elections, said in an email when asked a similar set of questions about the curfew. As to an earlier question on whether the board is considering other changes to respond to the unrest, Coll said that election “workers are trained to respond to emergencies by calling the police when necessary.”

Dozens of other cities could run into similar problems. The Baltimore board of elections also announced that it shuttered a ballot drop box outside the board of elections office in the city on Monday “due to safety concerns in the area.” (The board directed voters to 14 other drop boxes throughout the city.)

In Hammond, Ind., Mayor Thomas McDermott Jr. — a Democrat who is running in the primary on Tuesday in the open-seat House race in Indiana’s 5th District — ordered a curfew for his city on Sunday night that was extended to Monday evening as well. But the city said it will likely be lifted on Election Day.

The coronavirus had already upended the primary season before the recent upheaval, and officials are struggling to ensure that the sanctity of the vote is protected.

“We’ve run out of ways to describe how unusual this situation is,” said David Thornburgh, the president and CEO of the Philadelphia-based nonpartisan good government group Committee of Seventy.

The Committee of Seventy partnered with the office of the Philadelphia City Commissioners, the city’s election agency, to run a series of mobile ballot drop-off points. But it had to cancel one scheduled for Sunday evening because of the unrest.

Other mobile dropoff spots around the city were unaffected on Monday.

There was a saving grace amid all the trouble — the steps many election officials took to mitigate the effect of the pandemic on voter participation in the first place.

“We’re a go,” Fitzgerald said of Tuesday’s primary. “We have record turnout already, before we even open the doors.”