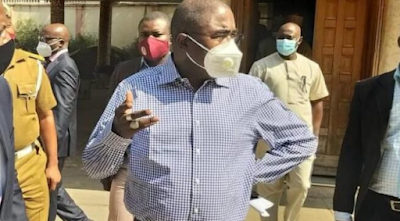 According to Buba Marwa, chairman of the National Drug Law Enforcement Agency (NDLEA), drug abuse is most prevalent in the states of Oyo and Lagos.

The NDLEA chairman stated this on Wednesday during a public lecture hosted by United Action for Change (UAC) in Lagos.

He estimated that 14.3 million Nigerians use drugs, with the south-west region having the highest prevalence.

Marwa expressed concern over Nigeria’s drug statistics, saying the country is “number one in the use of cannabis”.

“Nigeria’s drug statistics should give every one of us a sleepless night,” Marwa said.

“Not less than 14.3 million Nigerians abuse drugs — Nigerians between the ages of 16 and 64 years. Among them, one in four drug users is female.

“Expectedly, cannabis is the most abused substance by Nigerians. What’s alarming, however, is that a staggering 10.6 million Nigerians abuse the use of cannabis.

“That number makes our country number one in the use of cannabis. Let’s ponder this for a moment; 10.6 million is more than the estimated population of Botswana and Lesotho combined.

READ ALSO:  How Ibidun Ighodalo prayed for me after I had miscarriage -Anita Okoye

“Most of the abusers first started at the age of 19, and the highest level of usage is concentrated in youth between 25 and 29.

“The highest abuse of drugs is reported in the southern geopolitical zone, with the south-west recording the highest prevalence with over four million Nigerians engaging in the use of various drugs.

“In this regard, the Lagos-Oyo axis is the epicentre of drug abuse in Nigeria.”

Pretty Mike, a popular socialite, goes spiritual as he storms an event in Port Harcourt (Video)

‘Someone should keep an eye on her.’ In the midst of the s*x tape saga, Jane Mena resumes twerking her backside (video)

The Ooni of Ife honours his daughter.

‘Money can communicate in any language.’ Reactions on social media as DJ Cuppy’s professor honours her

Toyin Abraham reacts as her film ‘Ghost and the Tout Too’ grosses over N177 million at the box office.