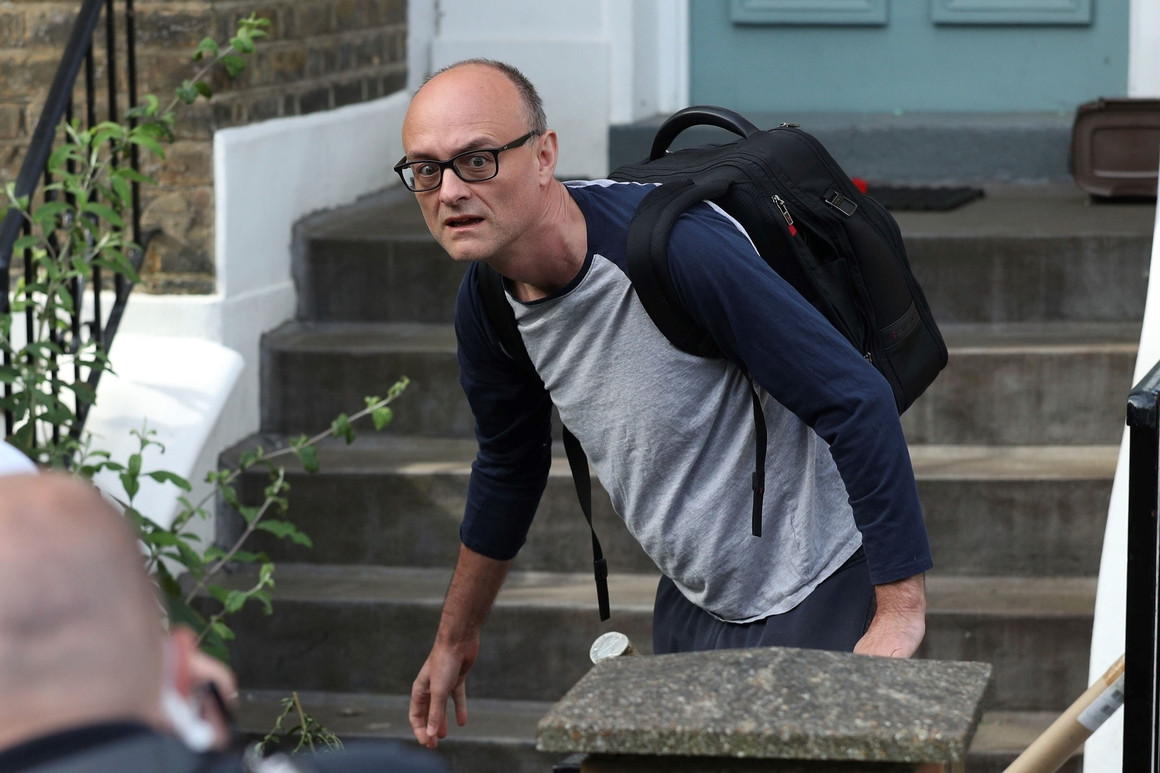 LONDON — Never mind whether Boris Johnson should get rid of Dominic Cummings, the real question is whether he can.

To the U.K. prime minister, his top aide — whose lockdown journey from London to Durham has dominated headlines for days — is more than just an effective political adviser. He is the linchpin of the Downing Street operation; someone who — according to several people who have worked with the two men in and out of government — gives Johnson policy direction and operational grip, while commanding more loyalty among a number of key officials and ministers than the prime minister does himself.

The two men’s working relationship was forged in the victorious Vote Leave campaign of 2016, which Cummings orchestrated, with Johnson as his frontman. Many of the top team in Johnson’s government — officials and ministers alike — are ex-Vote Leave, veterans of endless media firestorms whose modus operandi has always been to “tough it out.”

But with the British public firmly of the view that Cummings breached the coronavirus lockdown that millions had been dutifully abiding by, and a growing number of Tory MPs calling for his resignation, can they hold out?

And if Cummings won’t go of his own volition, will (or can) Johnson remove him? Don’t count on it, said one person who worked with both men at Vote Leave. “The whole operation is Dom. The whole of No. 10 is staffed by Dom protégés. Ministers, secretaries of state and special advisers are only in place if he says so … If he doesn’t want to go, it would be meltdown for Boris to try to make him.”

In the view of one seasoned commentator, the editor of the Reaction website Iain Martin, Johnson is “psychologically dependent” on Cummings, although the pair’s connection seems perplexing at first glance, their personalities strikingly different.

But, those who know both men say, they are complementary. “As a big picture person, Boris needs a details man. And as a frontman, he needs an ops guy,” said another senior figure from the Vote Leave campaign, speaking on condition of anonymity in order to freely discuss former colleagues. “Dom fills this skill set better than anyone else in Westminster, making him nearly (but not completely) irreplaceable.”

Johnson, the former Vote Leave figure said, would be loath to part company with Cummings even in ordinary times. In the midst of the worst public health crisis for a century, a collapsing economy and the imminent end of the post-Brexit transition period, he’ll hold him ever more tightly.

“In quieter times, it is conceivable that a more collegiate figure [than Cummings] might work,” they said. “[Now] the PM needs clarity and grit, so I don’t expect Dom to go anytime soon.”

Besides the operational impact of losing Cummings himself — he is the chief architect of the government’s policy agenda and the person who ensures, via relentless polling and focus groups, that No. 10 remains focused on what Johnson calls “the people’s priorities” — there is the risk of who might go with him.

Vote Leave veterans occupy several top jobs in No. 10 and the Cabinet: from communications director Lee Cain and Brexit adviser Oliver Lewis to Foreign Secretary Dominic Raab, Cabinet Office Minister Michael Gove and Home Secretary Priti Patel. Johnson may have been the frontman, but until very recently, some of the key figures who now answer to him aspired to the crown in their own right. Some of them owe more loyalty to Cummings than to Johnson.

Gove, in particular, has a far deeper-rooted relationship with Cummings — his former special adviser — than Johnson does. Even the young and popular chancellor, Rishi Sunak, the first Vote Leave figure said, was “very much a Gove protégé” in the EU referendum days.

Parting company with Cummings might seem like a simple choice for Johnson, given the level of public anger about his alleged breach of rules he helped create, but unless he chooses to go, the prime minister risks upsetting the balance of power within the influential governing set of which he is the figurehead but not the spiritual leader.

Cummings himself, reluctant to come into government at all when Johnson sought him out last year and initially intending to stay in post only until Brexit was achieved, now seems determined to stick around, in his own words, to help the country through the crisis it faces. He is, colleagues say, loyal to his boss — and for Johnson the loyalty of such a figure matters a great deal.

READ ALSO:  June 12: There are many heroes who remain unsung – Atiku

“For any leader, the circle of people who they can completely trust is one that tends to narrow,” said a third former Vote Leave figure, the campaign chair Gisela Stuart. “And for Boris it started with a narrow core to begin with.”

If Cummings does go, it therefore seems likely it will happen in consultation with Johnson, not under orders.

Cummings is famed for his ability to read and respond to public opinion, and if there is anything likely to make him think he must fall on his sword, it is emerging evidence of a free-fall in government support.

According to research firm Savanta, Johnson’s personal rating has fallen from +19 to -1 in just four days, while the government’s is down to -2, the London Evening Standard reported. Meanwhile, a YouGov poll on Tuesday found 59 percent of Brits think he should quit.

So far Cummings and Johnson show no sign of giving in to what they used to dub “the will of the people.”

“Dominic Cummings’ key strength during the referendum and election campaigns was understanding what it is the public does and doesn’t care about, and then focusing on the important things,” said Chris Curtis, political research manager at YouGov. “However, one of the reasons why the past few days have played particularly badly for the government is because on this occasion they have misjudged that calculation. They thought the story would move on but it hasn’t.”

Johnson may be conscious that, with criticism of the government’s coronavirus response already rife, giving in and losing his top adviser risks emboldening opposition parties and media critics — and leaving himself even more exposed.

“The prime minister — having decided to keep him — has got to keep him,” said one former Cabinet minister. “To lose him now would be a very great loss of prime ministerial authority. You either dig in or you don’t. The capital is spent now. If he got rid of him he would lose even more capital and he would be weakened. If he got rid of him now the blood would be in the water and the sharks would smell it.”

Johnson has faced “trial by media” before, the ex-minister added, and has “stuck it out.”

“He doesn’t like the idea of people quitting if they haven’t done anything wrong. I expect he will sympathize with Dom over that and stand by him.”

However, public disapproval makes this episode different from some of the criticisms Cummings and his set have faced in the past, such as over their misleading use of figures during the Brexit referendum or apparent disdain for constitutional norms in battles with Parliament over Brexit.

For Johnson, unless attitudes change, it increasingly looks like a problem with no good solutions: lose Cummings and with him the engine of his government or keep him and lose the public.