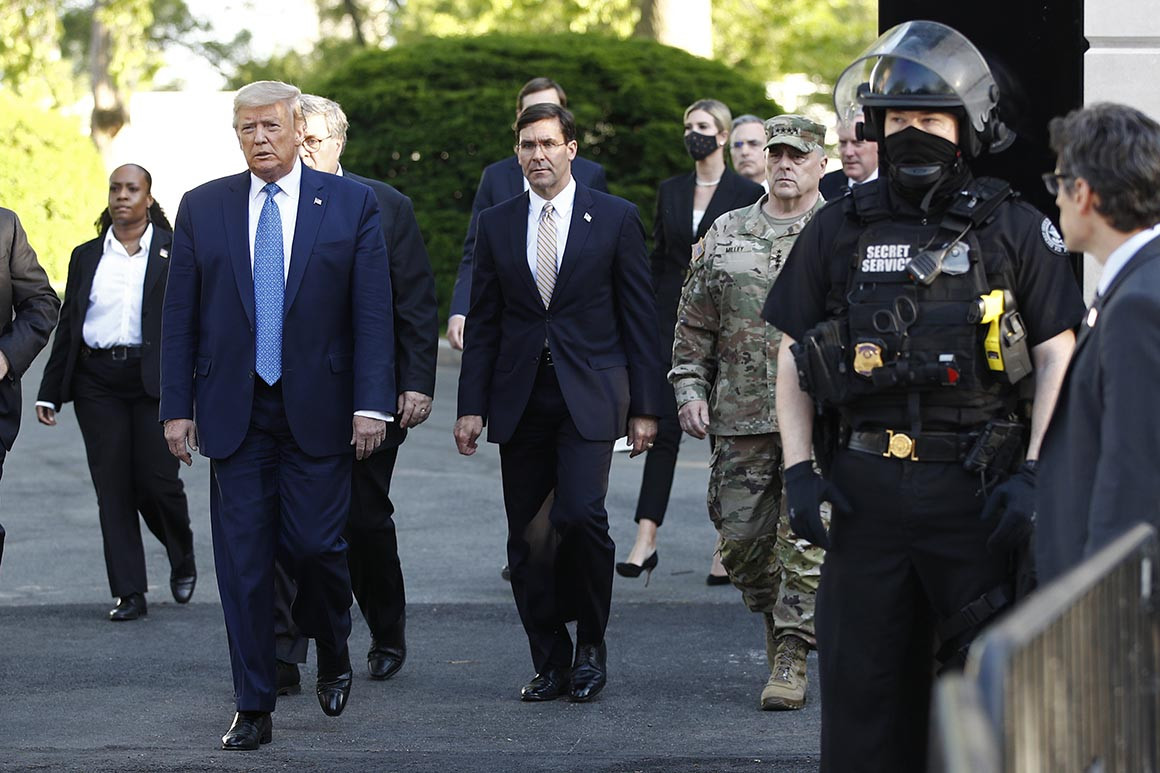 Several of the president’s senior aides spent the weekend debating the merits of Trump delivering a formal address to the nation about the civil unrest — both the peaceful protests and the violent riots. Top staffers like Meadows wanted Trump to give a speech to emphasize his law-and-order credentials — a selling point for many of his base supporters — while Kushner and counselor to the president Hope Hicks urged restraint. The latter two aides worried that a speech in this environment could alienate key voters, including African Americans and suburban women, whom the Trump campaign has sought to make inroads with ahead of the 2020 election.

Others close to the White House said the format would end up backfiring on Trump, who looked uncomfortable and restless during his last Oval Office address about the coronavirus pandemic in mid-March, and encouraged him to take stronger action against rioters instead of offering another string of comments.

“He can’t moderate his tone or inflections,” one person close to the White House said before Trump’s Monday evening remarks. “He’s a terrible teleprompter reader. He’s imprecise. He’s a blunt instrument, so the idea that Trump is going to get on television and say anything that comforts people — it’s not going to happen.”

Some of the president’s aides argued internally that the string of protests in major cities stemmed not just from anger over Floyd’s death, but from frustration over the coronavirus lockdowns and the upsetting state of the U.S. economy. The president should wait a few days before deciding on his next steps, these aides suggested.

But by Monday mid-morning, Trump’s political advisers and many within his political base were apoplectic that he had not yet delivered an address to assure Americans of their safety, or announced further actions to prevent daytime demonstrations from further descending into clashes between law enforcement and protesters.

Conservative news outlets and Trump loyalists were publicly trashing the president for staying silent on Sunday, apart from a tweet announcing his decision to designate anti-fascism protesters known as Antifa as a terrorist organization. Trump also went after the media in a pair of tweets Sunday evening and shared the all-caps message: “LAW & ORDER!”

“It would be great if the President of the United States would stop rage tweeting in all caps and actually take decisive action as a leader instead of going MIA as our nation melts down,” Republican operative Caleb Hull said on Twitter. “I’ve heard nothing but disappointment from @realDonaldTrump’s biggest supporters.”

Trump‘s Monday evening speech came days after he was taken into a White House bunker at the outset of protests in Lafayette Park, prompting a mocking “Where’s Trump?” message to circulate over the weekend online.

Conservative commentator Ann Coulter, author of “In Trump We Trust,” questioned the reason for his lack of visibility after Saturday night’s violence. “Is it possible Trump has resigned and they just haven’t gotten around to the press release?” she wrote on Twitter Sunday evening.

One Republican close to the White House described violent riots as “a political goldmine” for Trump in the middle of an election year, “but only if the president takes advantage of the opening the left has given him.”

Trump allies, advisers and friends were reaching out to the president and his top aides directly over the weekend to pressure him to do something — if not a speech in the Oval Office then one in the Rose Garden or another White House setting. Some White House aides, frustrated by what they viewed as a weak response by the president, sought reinforcement from outside allies who talk with Trump regularly — hoping they could persuade him to take a sterner approach moving forward.

White House press secretary Kayleigh McEnany had swatted down the idea of an Oval Office address during an appearance on “Fox & Friends“ Monday morning, even as some of her colleagues continued to push for one internally.

“A national Oval Office address will not stop Antifa,” McEnany told the Fox hosts. “What is going to stop Antifa is action, and this president is committed to acting on it. He has several meetings pertaining to that today.”

McEnany’s comments echoed what Kushner privately told other White House aides and advisers as he urged a more restrained approach over the weekend.

But with Kushner and Meadows both absent from the White House on Sunday, the dearth of top staffers around Trump left top allies and advisers under the impression the president was making decisions alone over the weekend at a key juncture in his administration.

Aides and advisers wanted Trump to try to parse out for Americans the difference between peaceful protesters and violent players, like Antifa, who the White House says is weaponizing the social unrest for their own interests. They wanted a focus on a base-pleasing message: the need for greater law and order.

“Working class Americans are aghast at these violent riots and are craving law and order, not anarchy,” said the Republican close to the White House. “A formal speech isn’t necessarily about ending the riots, it is about calming the waters and giving people who are fearful for their well being a sense of safety.”

When asked why Antifa keeps coming up in the administration’s messaging, Justice Department spokeswoman Kerri Kupec said officials “received information from state and local authorities and our U.S. Attorneys” on Antifa’s role, although she declined to go into details. The FBI has been interviewing some suspects who have been arrested in connection to violence over the last week.

READ ALSO:  No brainer:Non-disclosure of child abuse would be an offence under National government

Trump’s political advisers believed delivering a sterner televised address could be a political boost for the president amid the pandemic, cratering economy and mass protests. They saw it as an opportunity to reassure the nation, including key voting blocs of senior citizens and suburban women, that the country would be safe, while putting political pressure on Democratic mayors and state leaders to end the violent riots.

In a phone call with the nation’s governors Monday morning, Trump called participants “weak” and accused them of treating violent protesters with too much leniency.

“You’re making a mistake because you’re making yourselves look like fools,” he said. “Some have done a great job, but a lot of you — it’s not a great day for our country.”

The White House’s acting director of the domestic policy council said Monday in a POLITICO Playbook virtual event that the White House was busy formulating its plans for the weeks ahead, but did not specify what new policies Trump might enact.

“We are working through a list of solutions and possibilities — bipartisan. How do we come together? How do we use this as a unifying force for this country?” Rollins said.