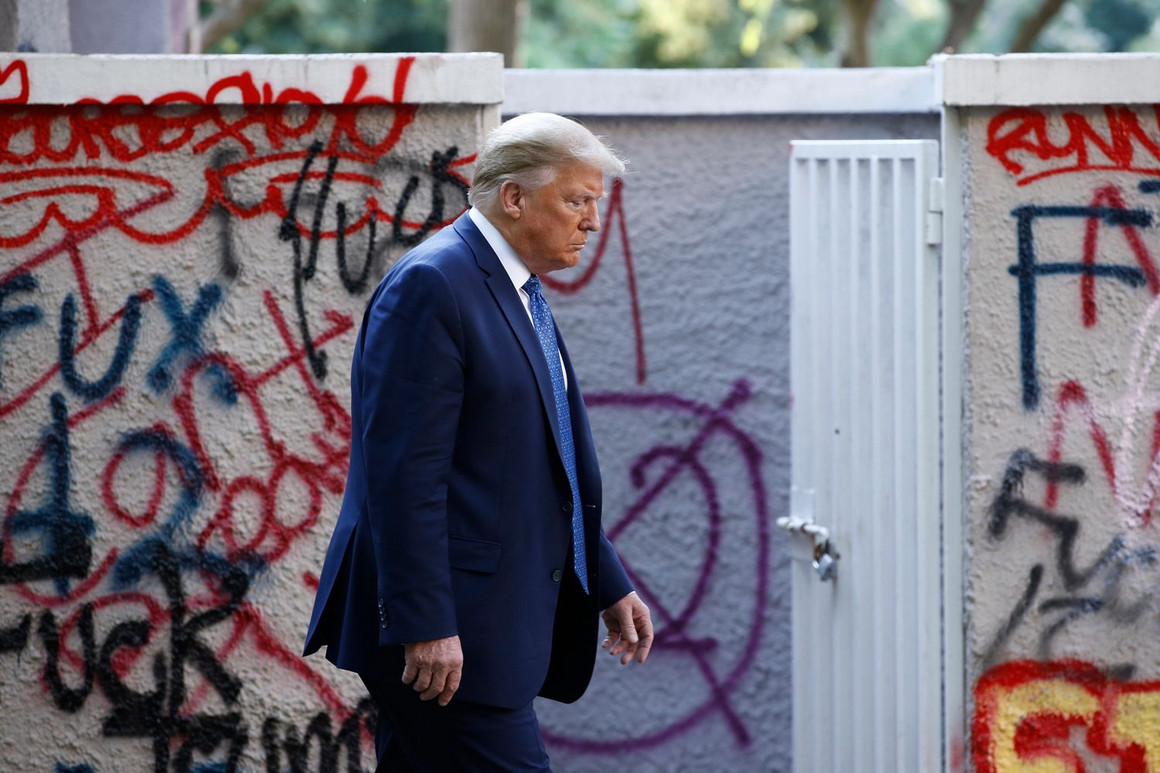 Antifa has become a conservative catch-all under President Donald Trump. Any left-leaning protest that grows unruly is antifa. A mob of people protesting the president could be antifa.

Over the last few years, Trump, his base and the authorities have blamed antifa for everything from protesting the president’s inauguration to, most notably, the recent looting and vandalism that has occurred amid peaceful protests over the death of George Floyd, a 46-year-old black man killed by a police officer while repeatedly saying, “I can’t breathe.” Trump allies in Congress are tweeting a desire to “hunt” antifa. Right-wing commentators are citing tweets from fake antifa groups as proof of mass fomenting violence.

Yet antifa doesn’t appear to have any organizing structure, and is connected only by an amorphous political ideology. There’s not much more than anecdotal evidence and blurry Twitter assertions that organized antifa groups showed up at the recent protests, executing any sort of “well-trained” tactics.

Still, the term is a potent one for conservatives. It’s the violent distillation of everything they fear could come to pass in an all-out culture war. And it’s a quick way to brand part of the opposition.

“In a way, antifa is the political correctness that all kinds of conservatives dislike, in a really radical form,” said Scott Walter, the president of the Capital Research Center, a conservative-libertarian think tank that maintains a database of research on left-wing organizations. “And the most common place to find political correctness and antifa is on college campuses, where the essential thing is that you want to silence your opponents completely, and you want to have mob rule. That’s what, I think, almost all conservatives see.”

The term “antifa,” short for “anti-facist,” has strayed far from its origins in pre-World War II Germany, where it referred to a paramilitary group that used violence in its fight against the Nazi party.

Starting around the time Trump announced his bid for the presidency in 2015, “antifa” morphed into a phrase that was used to broadly paint liberal protest organizers as driven to destroy civilized society through extreme measures. Even groups like Black Lives Matter have been tarred with the brush in the past, with conservative writers and cultural critics like L. Brent Bozell associating BLM tactics with those of antifa. Attorney General Bill Barr has described violent protesters as using “antifa-like tactics” rather than the more generic term, “anarchist.”

“Antifa just became a term used by anyone and their grandma to describe somebody who was opposed to the open fascism that was being paraded around in all kinds of media,” said Alexander Reid Ross, an instructor at Portland State University and the author of “Against the Fascist Creep.” “I think with the popularization of the alt-right, there was sort of a counter-popularization of antifa, to the point where it simply describes people who are anti-fascist or people who are against racism and are willing to protest against it.”

In recent years, the Trump administration has sought to brand antifa as a terrorist organization, building it up in speeches and in appeals to voters.

And with Floyd’s death, Trump and conservatives have used that rhetoric to try and draw a line between what they describe as “peaceful” Black Lives Matter protesters and any violent instigators, instead of quibbling with whether the police officers acted appropriately — a stance that is difficult to take given the video showing the Minneapolis police officer kneeling on Floyd’s neck for several minutes.

“Dangerous MOBS of far-left groups are running through our streets and causing absolute mayhem,” read a fundraising email the Trump campaign sent out Tuesday. “They are DESTROYING our cities and rioting — it’s absolute madness.

Trump on Sunday declared that he would formally designate antifa as a terrorist group. It’s a threat he made previously in the summer of 2019, when a Portland antifa group repeatedly clashed with far-right groups like the Proud Boys over several weeks of demonstrations.

Nothing came of those threats, though, and few legal experts think that the latest declaration will actually pan out. Antifa, they note, is a decentralized movement rather than a national organized group. It has no leadership, hierarchy, or centralized recruiting, propaganda or fundraising mechanisms — characteristics that would give the government the ability to prosecute these groups as if they were the Islamic State. In addition, current law prevents the government from declaring domestic groups as terrorist organizations.

“It’s like calling Deadheads or Red Sox Nation” an organization, said Brian Levin, the director of the Center for the Study of Hate and Extremism at California State University, San Bernardino.

Yet there’s a reason Trump, his allies and his base choose to promote the antifa threat, according to extremist researchers: it amplifies an amorphous danger, and allows Republicans to claim the mantle of law and order.

“I do think there’s a kernel of truth in what the president is trying to do,” Levin continued. “My issue is that I think he’s taking that kernel of truth and exploiting it, potentially for some political purpose that is decoupled from actually addressing extremism.”

It might also cloud narratives about the protests, serving to “destabilize the public understanding of what’s actually happening,” Ross added, noting that there have also been confusing reports about the presence of fringe conservative groups at the protests. The Nation on Tuesday also reported that an internal FBI memo indicated “no intelligence” that antifa was involved in protests on Sunday. “I think that [confusion] can really marginalize the whole motivation behind the protests.”

But the messaging lands among conservatives, who have fears of their own.

“I think that the president is trying to say that if you’re a terrorist, you lack moral authority,” said Walter. “You’re not somebody who has to be listened to, or taken with any moral seriousness. You are outside the bounds of civilization. And certainly most conservatives, I don’t think, would object to that.”

While Walter said he personally empathized with the broad message against police brutality against African-Americans, he observed that conservatives were equally concerned, if not more, about antifa using violence to promote those causes. He pointed to college students protesting divisive conservative speakers, as an example, noting the time protesters descended upon a Milo Yiannopoulos talk at the University of California, Berkeley in 2017, and claimed that his speech was “violence”.

“Conservatives object to that in principle, because speech isn’t violence,” he said. “But they also are very worried because the left likes to swap that little equation and flip it the other way. ‘Our violence is the speech. So if we burn up police headquarters and police cars and loot stores, well, that’s really just speech, that’s just people objecting to some political or public policy.'”

But regardless of what conservatives think about antifa, Ross said, Trump appears willing to exploit it.

“It’s this kind of thing that he does, periodically; using the term as a sort of Boogeyman that can accumulate all those things that he hates, and take on these super powers that require the full force of law enforcement to neutralize,” he said. “And so, in this case, I think that pretty much the cardinal reason for trotting it out is to create a scapegoat.”

Confirmed: China orders Yunnan’s Bitcoin miners to shut down by the end of June.

Dogecoin’s price has dropped by 20% since Coinbase’s listing, while Bitcoin has remained stable.

The Director of the UK Crime Agency believes that selling apartments for Bitcoin might attract criminals.