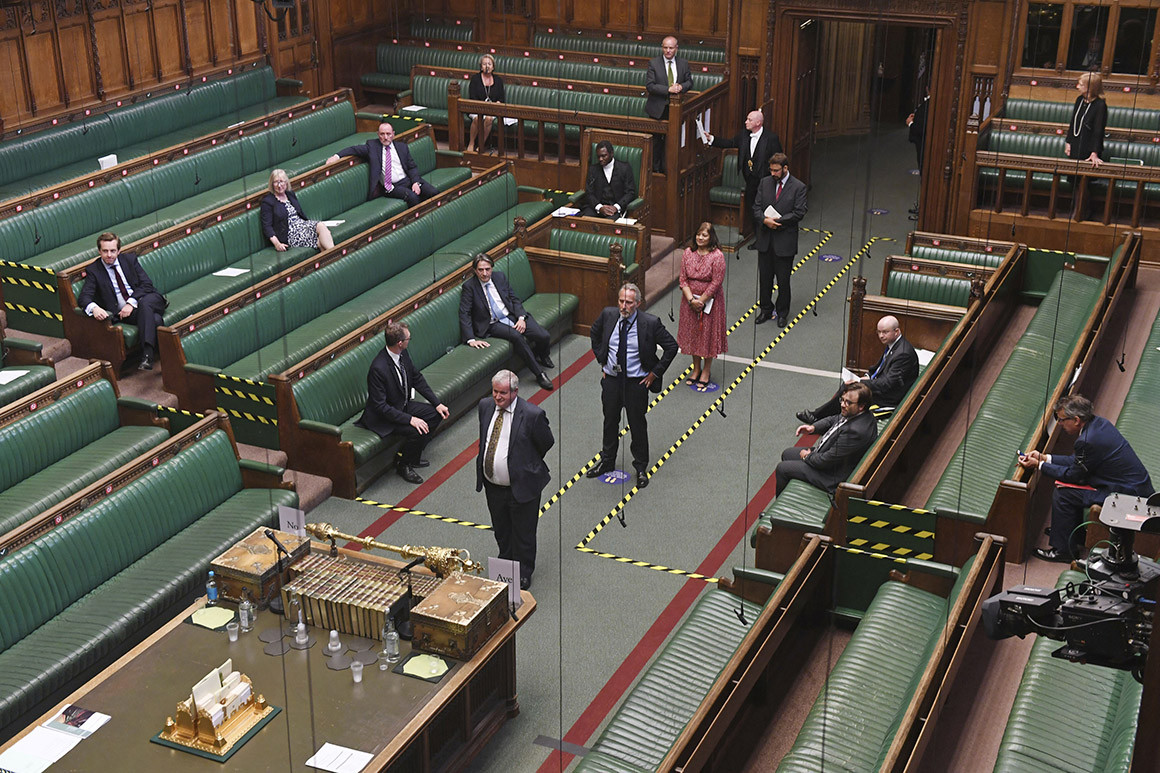 LONDON — The House of Commons proved Tuesday just how much it loves a queue.

MPs backed a proposal to end virtual voting in the U.K.’s lower chamber, casting their votes using a socially-distanced queuing system for the first time.

Standing in a long line stretching from the chamber through to Westminster Hall and out of the building, roughly two-thirds of MPs slowly edged their way into the chamber to cast their votes in a process that took just over 45 minutes.

The system replaces the usual “divisions,” which see MPs walk through either the Aye or No lobby and usually take around 15 minutes, even if all 639 voting members are present.

Leader of the House Jacob Rees-Mogg, who drew up the plan, said parliament must be conducted in person, asserting that during the pandemic MPs have “not been doing the important work of legislating” and that “voting while on a sunny walk or watching television does democracy a disservice.”

Many of his colleagues, who spent much of the afternoon waiting in what has been dubbed the “Rees-Mogg conga” by Opposition Chief Whip Nick Brown, were less convinced.

“Voting. In the 21st century. Yep,” tweeted Labour’s Liz Kendall. “This is a farce. I should think we will be back to remote voting before we are all much older,” added Conservative Steve Baker.

Shadow Leader of the House Valerie Vaz and women and equalities committee chair Caroline Nokes both labeled the plan “discriminatory” in a fiery debate before voting began.

Mogg was also blasted by Orkney and Shetland MP Alistair Carmichael, who said that he had traveled for 18 hours, involving four different forms of transport, to get to London. He added the plan represented a “recipe for a parliament for people who live within driving distance of London.” The Scottish National Party’s Westminster leader Ian Blackford, who has a similar journey from the Isle of Skye, called his long commute “a waste of time.”

Rees-Mogg had earlier promised an amendment would be put forward Wednesday to allow those who could not attend due to age or for medical reasons to take part in debates remotely — but not to vote. Pressure had grown on Rees-Mogg after MPs on all sides, including Conservative Robert Halfon, had publicly complained about the impact the new system would have on MPs who are shielding from coronavirus.

But MPs rejected — after another queue — an amendment from procedures committee chairwoman and former minister Karen Bradley to allow remote voting to continue and Rees-Mogg’s plan eventually passed with a majority of 91.

The Commons had operated hybrid proceedings since April, with members able to take part in debates either in person or virtually using Zoom. Digital voting was introduced after lengthy trials last month, with some MPs voting online from home on May 13 for the first time ever.

Many MPs looked visibly confused by the new system, which requires members to line up before stating their name and which way they wish to cast their vote. Welsh committee chair Stephen Crabb accidentally voted the wrong way, while countless MPs had to be told what to do as they entered the chamber, adding considerable amounts of time.

Happily for all concerned, MPs have another opportunity to try the system before they go home Tuesday night. Unhappily, it is forecast to rain Wednesday, when MPs will be back to do it all again.

The House of Lords, meanwhile, will start its own hybrid proceedings next Monday with the first digital votes held the following week.