The splitting headaches began when smoke from wildfires rolled in around Tim Hunt’s suburban Seattle home. Next came debilitating fatigue. 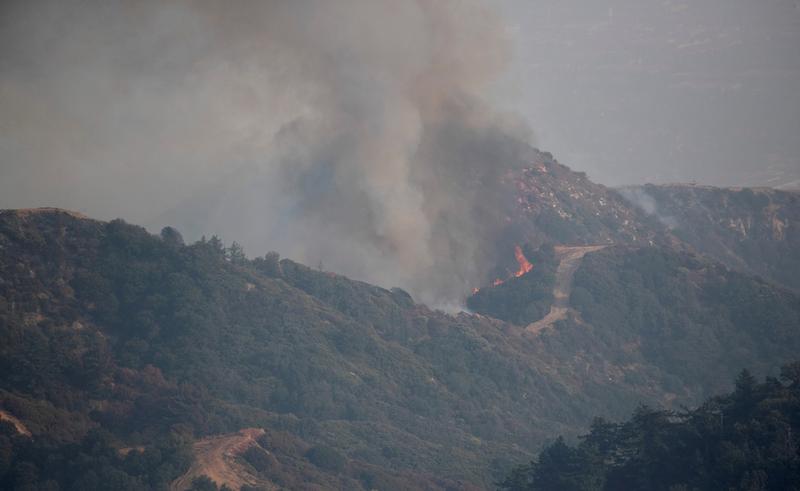 As deadly wildfires rage across the U.S. West, Hunt and others are struggling with some of the world’s worst air pollution.

“I get out of bed to eat and drink water, and go back to bed,” said the 64-year-old retired software engineer, who suffered lung damage in 2017 from a bad case of the flu. “It’s like there’s not enough oxygen in the air.”

Enormous plumes of ash and smoke have spread from the region, where nearly 5 million acres were ablaze on Tuesday, compounding the public health crisis of the coronavirus pandemic.

In California, levels of lung-polluting particulate matter have jumped far beyond the summertime norm, bathing skies in eerie tones of orange and sepia.

Hospitals in hard-hit Oregon report a 10% increase in emergency room visits for breathing problems. Doctors are being inundated with calls from worried patients.

Air pollution, in the case of wildfire measured by the amount of fine particulate matter swirling in the air, is considered a serious health hazard linked to diseases including asthma, lung cancer, heart disease and early death.

READ ALSO:  Trump ‘like a child’ in responding to coronavirus, Biden says

“I can’t see out my window past two cars,” said Dr. Gopal Allada, a pulmonologist who teaches at Oregon Health & Science University School of Medicine. Allada’s office is swamped with calls from patients experiencing breathing problems and asking for advice on what to do about symptoms that include coughing, wheezing, throat irritation, headache and racing heartbeat.

“We’re just trying to field the calls,” Allada said. “I would have loved to have had more people answering phones.”

In Washington where Hunt lives, the air quality on Tuesday ranged from unhealthy to hazardous at every site monitored by the state.

Residents were stuffing towels in door cracks or sleeping in face masks to cope.

Particulate matter smaller than 2.5 micrometers, known as PM2.5, is the key measure for harmful air pollution. The particles are smaller than the width of a human hair, small enough to burrow deep into a person’s lungs and even find its way into the bloodstream.

But smoke from devastated communities can also contain toxic chemicals from burned plastic and other manmade materials in cars and buildings such as asbestos, synthetic rubber compounds and heavy metals. These can then pollute not only air but nearby waterways or soils.

A Reuters analysis of California air quality data showed moderate to hazardous air quality on Sunday and Monday at all but about 20 of more than 120 sites monitored by environmental officials, even as some smoke started to abate. About 40 sites, including San Luis Obispo along the Pacific Coast and large swaths of the agricultural Central Valley and Sierra Nevada foothills, had higher levels of pollutants than usual for six days running, state data showed.

In San Francisco, an area usually spared poor air because of its proximity to the San Francisco Bay and Pacific Ocean, levels of PM2.5 pollution have been three times California’s standard limit of 35 micrograms per cubic meter for at least six days.

“I can’t recall a time when we’ve had this amount of smoke for this long a time,” said Sylvia Vanderspek, chief of the Air Quality Planning Branch of the California Air Resources Board.

The worldwide COVID-19 pandemic is also complicating efforts to help people at risk for lung and breathing problems, said Dr. Afif El-Hasan, a pediatrician in Southern California who volunteers with the American Lung Association.

Wildfire pollution can make people more susceptible to COVID-19, he said, and the best masks for filtering smoke are the same N-95 face coverings desperately needed by doctors and nurses treating COVID patients, making medical professionals hesitant to recommend that patients buy them.

It has also been difficult to help people find respite from the bad air, other than to recommend staying home and indoors.

“Normally when we give air quality alerts we say where people can go,” said Dylan Darling, a spokesman for the Oregon Department of Environmental Quality. “Often the Oregon coast can provide refuge or the mountains. But right now there is not a place that’s good to go for fresh air.”

READ ALSO:  Soggy, wet Christmas in the dark for hundreds of thousands in U.S. Northeast

After the release of a new COVID-19 edition, Bitcoin falls below $54,000 and equities fall.

A new set of rigors regulations for token issuers has been proposed by a South Korean regulator.

Tanzania is apparently planning to introduce a CBDC.

On the road to adoption, stablecoin issuers are positioned to be future banks.

Nigeria will not have elections in 2023, according to Apostle Okikijesu.

Diezani is unsuccessful in her attempt to reclaim $40 million in jewellery seized by the FG.

Finally, a court considers bandits to be terrorists.

‘This is how I’ll speak till I’m old.’ Murphy Afolabi responds to those who insult him for his Yoruba accent.

‘You will always be the best boss on the planet.’ On Don Jazzy’s 39th birthday, singer Tiwa Savage pays tribute to him.

‘How come dey have an open leg?’ Nina from BBN confronts Teebillz about his remark against Tacha.

Teebillz, Tiwa Savage’s ex-husband, considers Tacha to be the most bankable among the BBN roommates without even opening her legs.