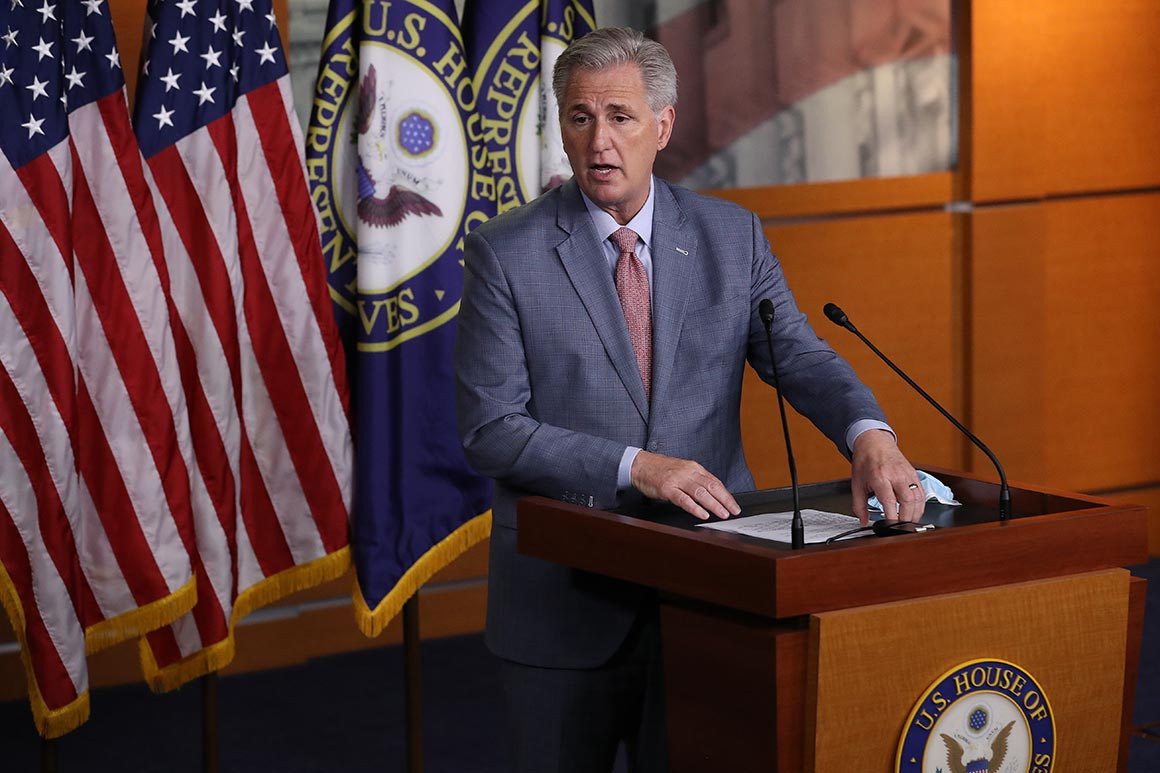 House GOP leaders distranced themselves Wednesday night from the Republican nominee for a hotly contested California congressional district, after POLITICO’s reporting revealed dozens of social media posts on his accounts that demeaned Muslims and immigrants.

In a statement, McCarthy said he and NRCC Chairman Tom Emmer of Minnesota “will take immediate action” if Howze “is found to be the originator of these posts.” Howze’s campaign has told POLITICO that he denies writing them personally, suggesting other, unidentified individuals had access to his accounts.

“The content in question on Mr. Howze’s social media channels is disappointing and disturbing. Bigotry and hateful rhetoric — in any form — have no place in the Republican Party,” McCarthy said in the statement. “These posts are unacceptable and do not reflect the Ted Howze that I have briefly interacted with.”

“These statements are unacceptable and not indicative of the Republican Party and what we are building here at the NRCC with our diverse slate of candidates,” Emmer said in a statement to POLITICO.

McCarthy and Emmer spoke on Wednesday night via phone and agreed to remove Howze from the NRCC’s Young Guns program while they look into the origin of the posts. Membership in the program gives candidates greater visibility and is often a signal to GOP donors to direct their contributions.

A formal break from Howze would mean cutting loose the GOP nominee in a competitive Central Valley congressional district, one of seven in California that Democrats wrested away from the GOP in the 2018 midterms en route to capturing the House majority. Republicans flipped one of the seven seats back in a special election last week — and Harder’s seat is, at least on paper, even more favorable to the GOP.

The statements came less than a day after a second POLITICO story about Howze’s past social media activity. McCarthy and the NRCC did not comment after the initial story, on May 6, which detailed posts in which Howze called the Islamic prophet Muhammad a rapist and a pedophile, suggested prominent Democrats were responsible for murder and accused Rep. Maxine Waters (D-Calif.) of “hitting the crack pipe too hard.”

Howze has claimed that he did not author these posts and that unnamed individuals accessed his Facebook and Twitter accounts. He would elaborate on who these individuals were, how and when he discovered the posts, which occurred over a period of several years, and why they remained publicly accessible until shortly before he launched an unsuccessful 2018 campaign for the seat.

“I made the mistake of allowing others access to these accounts unknowingly — and I am angered, horrified and extremely offended that these ugly ideas were shared or posted by those individuals several years ago,” he said in a statement in early May.

When approached again this week with additional posts from his account, his campaign issued a statement referring to the matter as “fake news or redundant stories by the same insider online blog.”

A review of his personal Facebook indicates Howze is an avid user of the account. He frequently posts pictures of himself and his family on vacations and at sporting events.

In the new posts uncovered this week, Howze accused the Clintons of having “a trail of bodies as long as the Mississippi River behind them.” He told members of the Black Lives Matter movement in a post, that as “a culture 95% percent of you vote in lock step for the same political party who held you as physical slaves and now wish to keep you as political slaves unable to effect any real change for the better.” He also wrote that Muslims could not be good American citizens.

And he compared recipients of the Obama-era Deferred Action for Childhood Arrivals immigration program to pedophiles. California’s 10th Congressional District, located in the state’s northern Central Valley, is heavily Latino and majority nonwhite.

John Bresnahan contributed to this report.