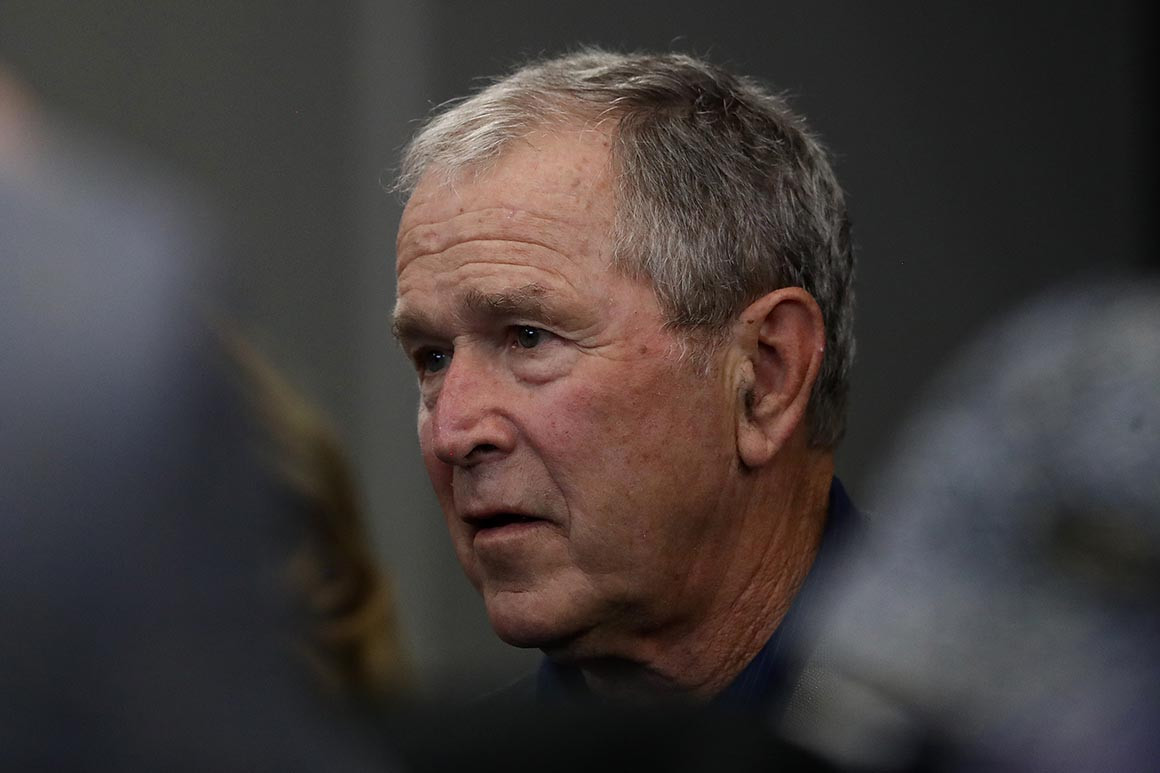 Former President George W. Bush is calling for a national examination of “tragic failures” in the realm of racial injustice following a week of protests over the police killing of an unarmed black man in Minneapolis.

In a statement released Tuesday evening, the 43rd president said he and former first lady Laura Bush had been “anguished by the brutal suffocation of George Floyd,” the 46-year-old who was pinned by a knee to the neck for nearly nine minutes last Monday by an officer of the Minneapolis Police Department.

The former president said that he and his wife had thus far “resisted the urge to speak out, because this is not the time for us to lecture. It is time for us to listen.”

But “it remains a shocking failure that many African Americans, especially young African American men, are harassed and threatened in their own country,” Bush said, as he argued that “the doctrine and habits of racial superiority, which once nearly split our country, still threaten our Union” today.

Bush expressed support for the protests that have sprung up all over the world. At times, the events have descended into violence, with some protesters setting fire to and looting businesses, while clashing with law enforcement officers who have fired tear gas and rubber bullets at demonstrators and members of the media covering the events.

The former president denounced the violence, asserting that “looting is not liberation, and destruction is not progress,” and that “lasting justice will only come by peaceful means.”

“We also know that lasting peace in our communities requires truly equal justice,” he added.

His comments stand in stark contrast to those of the current occupant of the White House.

President Donald Trump has faced criticism over the past few days for centering his public remarks on instances of violence and looting rather than addressing the root cause of the protests — disparities in law enforcement and inequities in the criminal justice system. On Monday, Trump urged state and local leaders to call in the National Guard to “dominate” protesters, and threatened to go over their heads and deploy the military to clamp down on the demonstrations if he deemed their efforts insufficient.

Unlike the current president, who has derided and dismissed protesters as “lowlifes,” “thugs” or anti-fascist operatives, Bush acknowledged the deeply rooted nature of protesters’ concerns, an injustice that he said would require “a consistent, courageous and creative effort” to rectify.

“This tragedy — in a long series of similar tragedies — raises a long overdue question: How do we end systemic racism in our society?” he said. Bush then appeared to take a veiled dig at Trump and the complaints leveled at him by critics. “The only way to see ourselves in a true light is to listen to the voices of so many who are hurting and grieving. Those who set out to silence those voices do not understand the meaning of America — or how it becomes a better place.”

“Many doubt the justice of our country, and with good reason,” he continued. “Black people see the repeated violation of their rights without an urgent and adequate response from American institutions.”

While Trump on Monday heralded the rule of law during a Rose Garden address announcing his threat to unleash the military on protesters, and dubbed himself “your president of law and order,” Bush on Tuesday noted that such a concept “ultimately depends on the fairness and legitimacy of the legal system.”

“There is a better way — the way of empathy, and shared commitment, and bold action, and a peace rooted in justice,” he said. “I am confident that together, Americans will choose the better way.”

Cardano bursts out against Bitcoin as the ADA market discovery approaches $2.

‘Extraordinary inflows of cash into Bitcoin’ In an hour, delete 12K BTC from Coinbase.

The Turkish government will track cryptocurrency transfers worth more than $1,200.

After being pulled on social media, Desmond Elliot breaks his silence.

‘Every breath taken is a gift rooted in fresh opportunities.’ Gbenga Adeyinka says as he clocks 53 minutes.

Johnny Drille, a singer, shares how he stays confident.

Iheanacho has been nominated for the April Player of the Month award.

Davido gives his daughter, Imade, a multimillion-dollar Range Rover for her birthday[video].

Reactions to ‘E Choke’ as BB Naija Nengi spends millions of dollars on a diamond wristwatch.