Civil rights icons John Lewis and C.T. Vivian were part of a tradition that often found its home in Black religion. A new generation of activists and organizers is doing things differently. 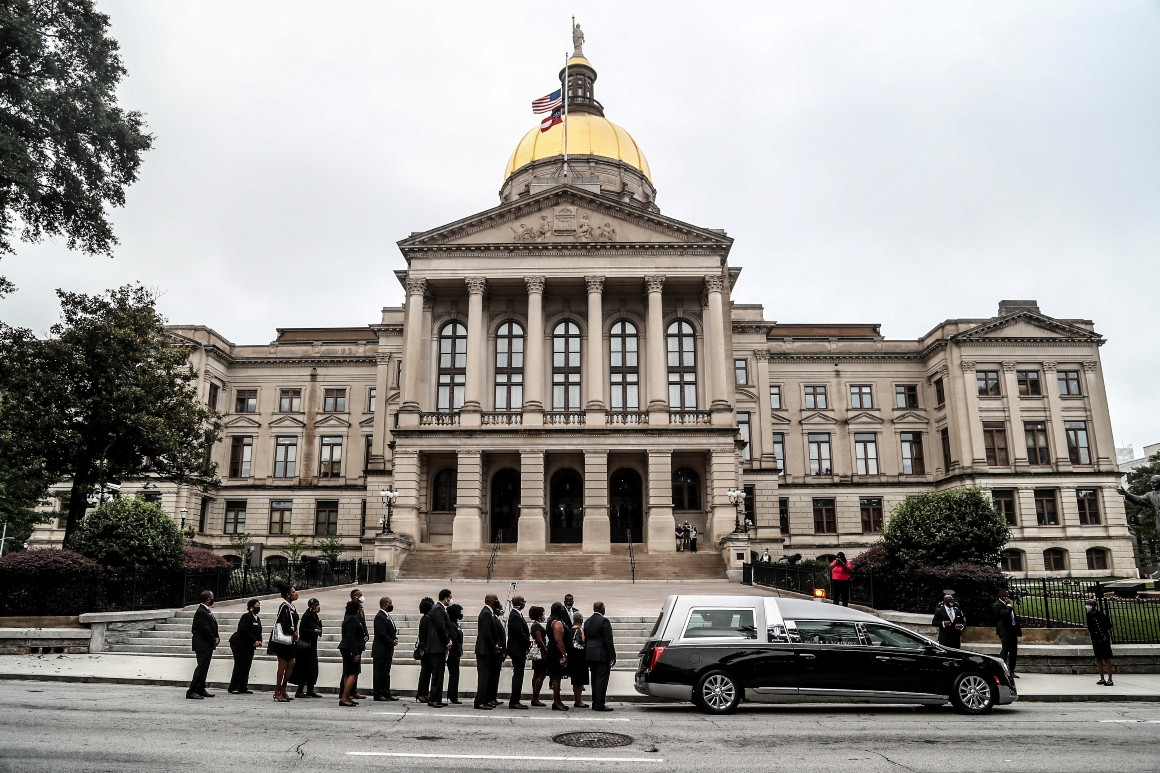 John Lewis was eulogized Thursday afternoon at the same historic Atlanta church that Martin Luther King Jr. once presided over, a nod to the centrality of the Black church for Lewis and other Civil Rights leaders of his generation.

The church’s role is now changing. Even as they inherit Lewis’ mantle, Black Lives Matter organizers say the Black church does not serve as the organizing hub, haven and heartbeat for their movement that it did in the 1950’s and 60’s.

It’s yet another sign that the Civil Rights movement is undergoing a generational transformation, and is taking on the characteristics of the young, less traditional and decidedly less religious organizers now filling the streets.“The church tradition has been very much focused on a singular male leader,” Janaya Khan, international ambassador for Black Lives Matter, explained. “This movement that we have now in Black Lives Matter has been led by and informed by women, queer and trans people — you know, the despised of the despised.”The tension is emblematic of a larger, ongoing conflict between activists, religious centers and age groups. Some organizers feel alienated by parts of the Black church’s doctrines and people of faith are grappling with how to embrace the Black Lives Matter movement and all of its members.Some members of the old guard Black churches say that dynamic has always been part of the debate between churches and movement leaders, or among churches, themselves, on the best way to get involved in the push for civil rights.

Lewis died of pancreatic cancer on July 17, the same day his friend and fellow activist, Rev. C.T. Vivian, passed away. Like many titans in the fight for Black civil rights in the 1960s, Lewis and Vivian’s connections to the church were inextricable from their organizing.

Lewis, whose higher education began at a Baptist college, grew up preaching to the chickens on his family farm and considered a career in the church before entering politics. Vivian, himself was a minister in addition to his work as a political strategist and organized Nashville’s first desegregation sit-ins while still in seminary. King once called Vivian, “the greatest preacher who ever lived.”

These connections to the church provided both men with a moral compass for the non-religious spaces they occupied, whether in Lewis’ capacity as the conscience of Congress or Vivian’s long standing post at the White House, where he provided civil rights counsel to four sitting U.S. presidents.

“You don’t get a civil rights movement of the 1950s and ’60s without the church,” said Raphael Warnock, the senior pastor at Ebenezer Church and a Democratic candidate for Georgia’s U.S. Senate seat. “When we see those marchers in the streets, that’s literally the black church pouring out of the pews into the public square — singing, in order to redeem the soul of America.”

READ ALSO:  How Google account gave away Hushpuppi to FBI

But there are some key differences between the current Movement for Black Lives, as it is known post-Floyd, and prior civil rights campaigns. While many Black churches were sites of planning meetings and safe havens for organizers, demonstrations in this era tend to find their center on social media, in the homes of allies or on the streets themselves.

More, the decentralized structure of the Black Lives Matter movement runs counter to the framework of Black churches, which are often led by a single person or small group of people.

And unlike a majority of leaders of prior Black-led movements, Black Lives Matter is neither driven primarily by men. Women and members of the LGBTQ community are among Black Lives Matter’s founders, as are many of the leaders of its more than 40 chapters across the country.

“I think the black church failed in terms of healing the issues of patriarchy and homophobia. And those two issues are fundamental to the Black Lives Matter movement,” said Cornel West, Professor of Philosophy at Harvard University. “White supremacy [is] evil. The Black church historically has tried to hit it head-on and oftentimes has been magnificent. But male supremacy, homophobia and transphobia are evil too. They’ve got to hit those with the same level of intensity as they hit white supremacy. That’s the challenge and the test of the Black church these days.”

Members of the clergy have publicly recognized this disconnect. In June, a group of theologians composed a public statement in support of Black Lives Matter, recognizing its connections to the Biblical teachings they study. Dr. Eboni Marshall Turman, Assistant Professor of Theology and African-American religion at Yale University, authored the letter.

“We have…forgotten who we are as a church and we have devolved into a certain kind of white, pious evangelicalism that really has us performing in black face,” Turman said. “We have dismissed the intersection of justice and righteousness and community from this idea of personal piety.”

Activists across generations and beliefs, however, can agree on this point: while their efforts may look different, it is impossible to have one without the other.

What “is missed often about what these movements have in common is we may not be of a religious tradition, but we absolutely are of a spiritual tradition,” Khan said, citing the examples of Lewis and Ella Baker, another civil rights forbear with ties to the church. “There is something inherently supernatural and spiritual about the work of social justice and the work of change.”

The goals of the Black Lives Matter movement also intersect with the objectives of many liberation-focused Black churches: self-sufficient, politically empowered Black communities, equal access to resources and deep regard for public safety.

Al Sharpton, Baptist minister and founder of the National Action Network, said that to suggest that the movement’s conflict with the church is a new phenomenon would be “rewriting of the movement.”

“This is nothing new,” Sharpton said. “Martin Luther King used to call it ‘creative tension.’ We need the push and pull between different disciplines and different tactics to come up with the best way.”

Sharpton pointed out that of the Big Six civil rights leaders of the 1960s who coordinated the first March on Washington — James Farmer, Roy Wilkins, A. Phillip Randolph, Whitney Young, King and Lewis — only one, King, was a preacher. Many, as in the case of Roy Wilkins, were often hostile to the church as an organizing tool and felt it got in the way of the movement’s goals. It’s a pattern that repeats itself in the Black Lives Matter era, Sharpton argued.

Two of Black Lives Matter’s founders, Patrisse Cullors and Alicia Garza, have spoken at National Action Network events and gone on Sharpton’s show “to show operational unity.” Younger activists have deferred to Sharpton in their organizing, as was the case in Minneapolis during George Floyd’s funeral, where it was accepted that Sharpton would deliver Floyd’s eulogy.

Activists of all generations, genders and sexual and religious orientations are united, moreover, in their view of how Lewis’ civil rights record has informed the work they have done and continue to do. His legacy proves especially critical now, following the more than two months of protests against racism and police violence that have made Lewis’ quintessential phrase “good trouble” newly relevant.

Speaking at Lewis’ funeral at Ebenezer Baptist Church, former President Barack Obama, weighed in from the pulpit on the biggest political issues of the day: Voting rights, fair Congressional representation and the presence of federal agents in America’s cities.

“We may no longer have to guess the number of jelly beans in a jar in order to cast a ballot, but even as we sit here, there are those in power who are doing their darnedest to discourage people from voting by closing polling locations and targeting minorities and students with restrictive ID laws and attacking our voting rights with surgical precision,” Obama, the nation’s first Black president, said.

Yet Lewis’ work, Obama continued, “vindicated the faith in our founding.”

Several organizers said Lewis’ legacy has helped them push the boundaries of what could be possible in their work.

Patrisse Cullors, a co-founder of Black Lives Matter, evoked Lewis’ words from his speech at the first March on Washington in her address to the Democratic National Committee’s platform meeting on Monday.

“Hearkening back to Lewis, ‘we are now involved in a serious revolution,’” Cullors said, borrowing language from his March on Washington address. Cullors encouraged the Democrats to embrace “sea changes” recommended by the Black Lives Matter movement, namely the BREATHE Act, which would limit federal ability to deploy police forces to cities and dramatically decrease the defense budget.

“It’s not enough just to have a seat at the table, we want to create a table or we want to flip the table over,” said Angela Peoples, an organizer and director of Black Womxn For, an organization that aims to galvanize the political power of Black women and gender non-conforming folks. “But even being able to name that as something that we want or that we even think is possible is only because those that have come before us have pushed their existence and their reality to see beyond what’s possible.”

This was true even in the face of bodily danger, something that has been associated with Lewis’ legacy as a protester. Jesse Jackson, former presidential candidate and founder of the multiethnic organizing Rainbow Coalition said that Lewis “became immortal” on the Edmund Pettus Bridge on Bloody Sunday in 1965. During that day, Lewis’ skull was cracked by a state trooper with a billy club.

“John never stopped fighting,” Jackson said. “He had no fear and was always a really gentle and tough-minded person.”

He also had his eyes on the future, even in his final days: one of the last pieces of legislation Lewis supported was the Justice in Policing Act, which aims to limit police violence. The bill, which would establish a national standard for police tactics and limit officers’ use of force, passed in the House on June 25, exactly one month after Floyd was killed.

“I think it highlights what is possible,” Reed said. “When we think about how some people put a beginning and end to movements, that movement [work] is actually a lifelong commitment.”

In the EOS ICO Class-Action, Block.one settles for $27.5 million.

The SEC excludes cryptocurrency off its agenda.

The SEC has requested an extension of two months to prepare internal documents on Bitcoin, Ethereum, and XRP.

As signs turn optimistic, the price of bitcoin might reach $85K in the next months, according to a research.

Is it possible that people are ‘underestimating’ Bitcoin and Ethereum?

‘I’ve been quiet for over a year,’ says Nkechi Blessing, days after her political boyfriend’s birthday.

Iyabo Ojo, an actress, has shut down social media with photographs from Toyin Lawani’s wedding ceremony.