Many will experience a very different Christmas Day a long way from family; reporter Karoline Tuckey talked with two of them about what Christmas Day will look like where they are.

One of the New Zealanders on patrol with the UN Mission in South Sudan, talking and sharing treats with children near Juba. Photo: Supplied/NZDF

Lieutenant colonel Megan Elmiger is stationed in Juba, the capital of South Sudan, helping the UN Mission to the country prepare for elections originally planned for 2015, that are now scheduled for 2023.

“South Sudan is completely different to New Zealand, the weather here is super-hot, it’s very barren, lots of rocky outcrops and 4WD tracks for roads, people sitting on the side of the road, beggars, children running around not going to school. I miss the green of New Zealand.

“There is a lot of fighting at times. It is calm and stable at the minute, but with the change between the wet and the dry seasons more fighting and cattle raids is expected. It’s volatile and it can change at any moment.”

Singing from a nearby church in the Internally Displaced Persons camp often drifts over the UN compound, and Elmiger was looking forward to hearing that on Christmas Day.

“There is a large Christian community in South Sudan, there’s people singing church songs on a Sunday. It’s always nice to listen to, because if people are singing and their souls are uplifted, then you can tell that they’re actually okay, and that’s a good thing over here.”

Elmiger has five children and a husband back home, who she misses incredibly. The family will have a big Christmas Day with extended family and lots of cousins to have fun with. And Elmiger will Skype in to talk to them.

There is a Christmas parcel coming from home, and she hopes it will have more pictures drawn by her children, to put up on her walls.

“I’ve got a few … love hearts, some rainbows and pictures of flowers saying ‘dear mum your eyes shine as bright as the stars, and your smile makes everyone happy’. Super cute sayings that remind me how wonderful my children are.”

A small group of NZDF personnel are in the Middle East providing logistics support to NZDF missions in the region, and have been looking forward to opening their RSA Christmas parcels. Photo: Supplied/NZDF

In Juba, she and the other three Kiwis working for the UN Mission will spend Christmas Day with the larger Australian contingent.

“It’s really great … we have a very special relationship. They’re putting on a pot luck lunch, and I have been determined to make the Kiwi pavlova and to prove again that New Zealand actually does own the pavlova!”

Squadron Leader Ben Smith (fourth from L) with the RNZAF Number 5 Squadron, which has been in Florida since March, training with the US Navy VP-30 Squadron. Photo: Supplied/NZDF

In the US, a team of RNZAF staff posted in Florida have their hopes set on a white Christmas with their families this year.

The team are stationed at Naval Air Station Jacksonville to learn to fly and to instruct other pilots to fly the P-8 Poseidon marine patrol aeroplanes that will be introduced in New Zealand in 2023, to replace the ageing P-3K2 Orions back home.

But for the holidays they have headed north seeking snow.

Squadron Leader Ben Smith said the eight New Zealand staff in the team are 11 months into a three-year posting.

“We’re here with our families, so there’s 23 of us total, and basically when coronavirus really stepped up here it made it very different to what we expected. And as part of the lockdown we locked down as a Kiwi bubble.

“We normally celebrate the big events together, and for Christmas we get a little bit of time off work, and there’s a big group of us heading north to try to hunt down that picture-perfect Christmas in the snow – something we wouldn’t get in New Zealand.

“We’ve got toboggans and we’ll try and get skis, and we’ll go skiing and go sliding down the hill, and find whatever we can and make snowmen.”

Smith said they did miss summer barbecues, but were enjoying the American festivities.

“They’re just bigger about it. They appear to go pretty berserk for Christmas lights… most of the streets around here have big groups of houses that are clearly competing with each other on how bright they can make their houses, and are wrapping their trees in hundreds of lights.”

He said most of all they missed their extended families.

“We won’t be able to spend our time with our parents, or cousins, nieces and nephews, but we’re kind of replacing that with our Jacksonville family. And luckily contact back home is really easy, via video messenger, whether it’s Facebook or Skype, or WhatsApp, whatever our go-to is.

“We’ll get up early with the kids, they’ll open up presents and we’ll enjoy that with them, and then eat a lot of food throughout the whole day.”

Back home at Burnham Military Camp, army chef Corporal Tyrone Broad was preparing to spread some Christmas cheer by serving up a good old-fashioned roast dinner.

He said one of his favourite parts of the meal is taking the time to make a traditional stuffing to go with the roast meat, and supplied his recipe for RNZ to share. 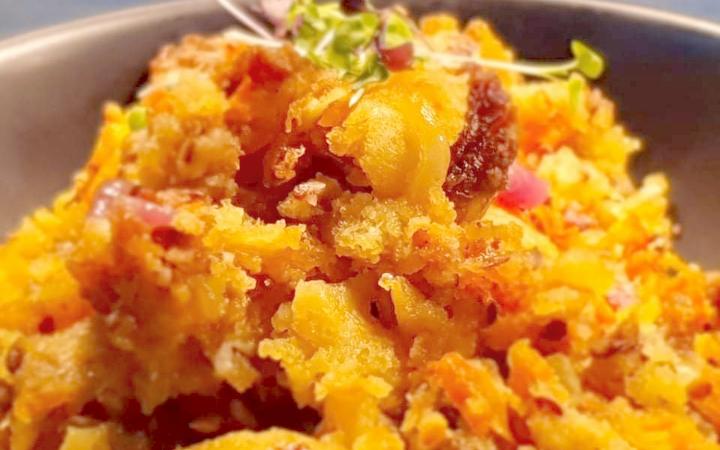 “This stuffing is both simple, fast and inexpensive, and tastes delicious. I love it because it’s so quick and versatile, and pairs well with any Christmas meat. I serve it here at the Burnham Combined Mess and at home, and my grandmother has even adopted the recipe herself.”