Tech
June 30, 2020
Spread the love
The company wanted to make sure Starliner’s parachutes will deploy in less-than-ideal conditions. 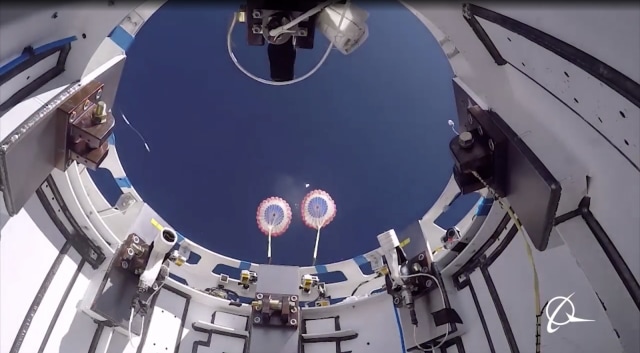 Boeing has a lot to prove before Starliner can make its second attempt to reach the ISS. One of the tests it has recently conducted focused on parachute reliability — in particular, the company wanted validate that the vehicle’s parachute system can deploy under an adverse set of environmental factors. The aerospace giant’s main objective was to ensure that the parachutes would inflate correctly even if an abort occurs early into launch.

“Parachutes like clean air flow. They inflate predictably under a wide range of conditions, but in certain ascent aborts, you are deploying these parachutes into more unsteady air where proper inflation becomes less predictable. We wanted to test the inflation characteristics at low dynamic pressure so we can be completely confident in the system we developed.”

In addition, the team added a simulated failure to the test, preventing one of Starliner’s three main parachutes from deploying. The test vehicle still landed safely about about two-and-a-half minutes after the drop despite the less-than-ideal conditions, making the test a success. Boeing will now use the data it collected to boost the Starliner parachutes’ reliability ahead of crewed flights. It will also share the data with NASA for the agency’s own vehicles.

The Starliner is one of the commercial crew vehicles designed to take astronauts to space from US soil along with the SpaceX Crew Dragon. Unfortunately, it failed to reach the ISS during its first test flight in December, because it didn’t achieve the correct orbit. An investigation revealed that Boeing didn’t perform end-to-end tests on the vehicle, which would’ve revealed the flaws that caused the test flight to fail. NASA has approved Boeing’s plan to fly another uncrewed flight, but it doesn’t have a launch date yet.

Our #Starliner parachutes and team performed with flying colors during a recent test. They showed that even under dynamic abort conditions and a simulated failure – astronauts would be safe.