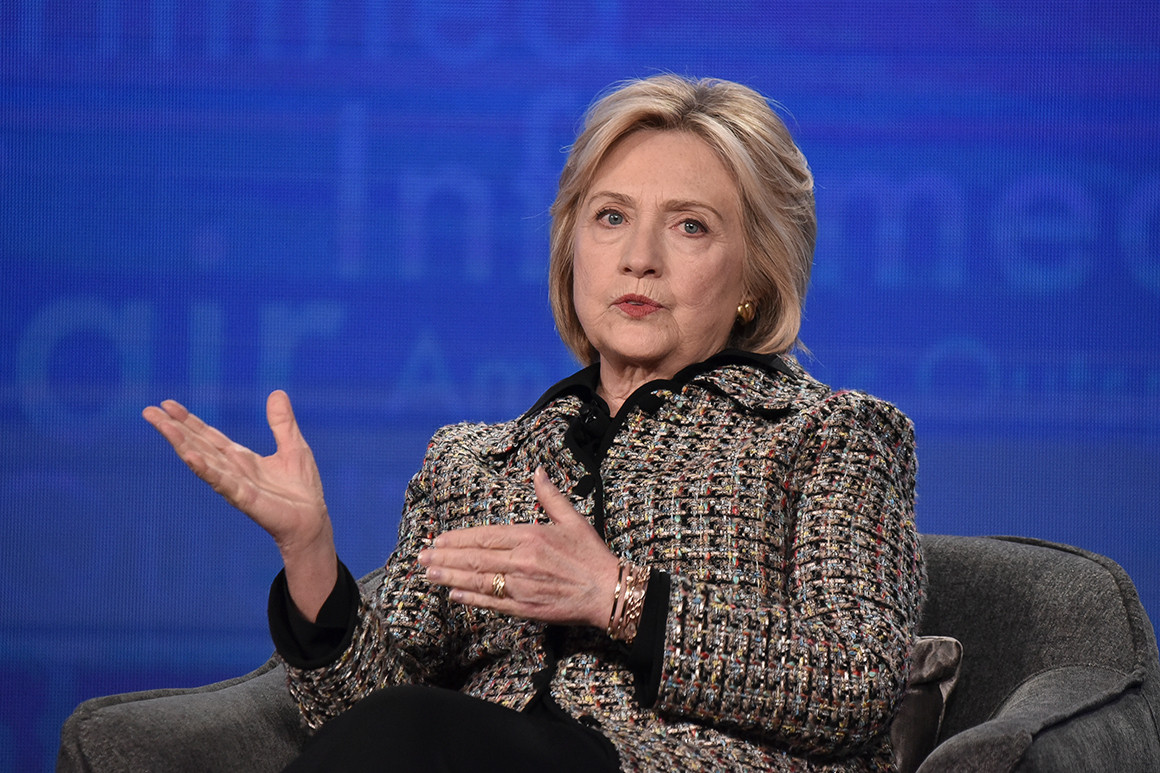 As a federal appeals court grappled on Tuesday with a politically charged dispute that long ago faded from the headlines, one of the most urgent and politically polarizing legal fights of the moment seemed to lurk just below the surface.

The official topic of Tuesday’s arguments before the D.C. Circuit Court of Appeals was Hillary Clinton’s bid to avoid giving an in-person deposition to a conservative group about the subject that dogged her during her 2016 presidential bid: her use of a private email account and server during her tenure as secretary of state.

However, some of the comments by judges and attorneys on Tuesday called to mind the ongoing battle royal over the Justice Department’s effort to abandon its prosecution of Michael Flynn, President Donald Trump’s first national security adviser, on a false-statement charge, despite Flynn’s guilty plea in the case.

Both the Clinton deposition dispute and the Flynn case imbroglio involve an obscure type of legal mechanism that is not currently a household word but may soon be, at least in Washington: mandamus. It’s a process that can be used to force a judge’s hand when an ordinary appeal isn’t available for some reason or just won’t do the trick.

None of the lawyers or judges explicitly mentioned Flynn on Tuesday, but as the participants jousted over Clinton’s request, at least some seemed to be offering arguments shaped by the blockbuster fight over the attempt to unwind the guilty plea that Flynn offered to special counsel Robert Mueller’s prosecutors more than two years ago.

While the Justice Department weighed in Monday with a full-throated endorsement of Flynn’s mandamus petition to shut down his prosecution, the department essentially sat on its hands after Clinton and her longtime aide Cheryl Mills filed similar petitions to block depositions that a judge ordered at the request of the conservative group Judicial Watch.

Some legal scholars suggested the Justice Department’s reticence was strange and perhaps even a political dodge aimed at diverting attention from the fact that it opposed a deposition from Clinton in U.S. District Court.

Justice Department attorney Mark Freeman was vague on Tuesday about exactly why it wasn’t backing Clinton’s move, but suggested that the rare rebuke to a judge was appropriate only in truly exceptional cases.

“We take very seriously the decision about when to come to this court and ask the court to issue the extraordinary writ of mandamus and we chose, in the interests of the executive branch, balancing the pros and cons, not to do so here,” Freeman said.

READ ALSO:  2023: Igbo presidency can only be achieved if we engage with the North - Ike Ekweremadu says

Of course, the government does file for mandamus to block judges in some cases and has not been bashful about doing so recently. In 2018, for example, the Justice Department filed such petitions to block court orders demanding testimony and records from Trump administration officials in connection with the adding of a citizenship question to the census. The George W. Bush administration also made a similar legal maneuver to block public access to details about Vice President Dick Cheney’s energy task force.

The Justice Department also rolled out the legal bazooka of mandamus on behalf of Trump himself, seeking to shut down a lawsuit that the governments of Washington, D.C., and Maryland brought alleging that he is illegally profiting from foreign and state government business at his D.C. hotel.

In a court filing in April, Freeman offered a bit more explanation about why the Justice Department wasn’t coming to Clinton’s rescue as it had for Trump, Commerce Secretary Wilbur Ross and, earlier, Cheney.

Freeman said the order for Clinton’s deposition was not as objectionable as other demands seeking testimony for the “impermissible purpose of probing internal government decisionmaking regarding official policy.” Instead, Judicial Watch’s fact-gathering is focused on compliance with the Freedom of Information Act.

The arguments on the Clinton email case on Tuesday, held via telephone because of the coronavirus pandemic, stretched to more than an hour and a half. That was nearly three times more than the court had scheduled.

At least two of the judges assigned to the case seemed to suggest an uphill battle for the former secretary, first lady, senator and two-time Democratic presidential candidate by stressing just how infrequently mandamus is granted.

The only judge currently assigned to both the Clinton case and the Flynn one, Obama appointee Robert Wilkins, didn’t offer the same kinds of generic observations on the legal tactic common to both cases. However, all the D.C. Circuit judges could eventually be asked to weigh in on the Flynn case.

Judicial Watch, which has strongly backed Flynn’s bid to deep-six his prosecution, nevertheless urged the appeals court to be very wary of using mandamus to quash the Clinton deposition. A lawyer for the group, Ramona Cotca, accused Clinton and Mills of trying to “short-circuit this process by using the most potent weapon in the judicial arsenal.”

Beyond the mechanism of the appeal, there are other tangled connections between the Clinton and Flynn cases. The jurist at the center of the Flynn showdown, Judge Emmet Sullivan, memorably excoriated Clinton over her use of the private email account and ordered earlier depositions on the issue, including one given by Mills in May 2016 in the midst of the presidential campaign.

Sullivan allowed Clinton to answer written questions under oath instead of being deposed, but another judge handling a separate case recently insisted on a deposition.

And Mills’ attorney, Beth Wilkinson, is now representing Sullivan himself as he opposes the mandamus petition against him over the Flynn matter. She did not argue on Tuesday, leaving the argument to longtime Clinton attorney David Kendall.

Kendall pleaded with the judges on Tuesday to wind down the long-running dispute over the emails, an issue many Democrats contend delivered the presidency to Trump. Kendall said Clinton and Mills had turned over tens of thousands of messages and had no more to give, so couldn’t be of any use in a FOIA case focused on accessing government documents. He also bluntly alleged that Judicial Watch’s aim wasn’t to seek information but to embarrass Clinton and her political allies.

“The real purpose of the depositions is harassment,” Kendall said. “It’s the creation of video footage that can be used for partisan, political attack ads. It’s social media fundraising.”

Griffith didn’t sound persuaded, suggesting that Clinton could petition the court to have no camera at the deposition or require the recordings to be sealed.

Cotca insisted there was good reason to proceed with the depositions, because Clinton and Mills might help elucidate where Clinton’s emails wound up and could help persuade the State Department to broaden its searches for records.

The Judicial Watch lawyer also made some news in the argument, revealing that a subpoena that was issued to Google in March turned up about 260 Clinton emails that appear to be work-related and not among the roughly 30,000 pages of emails Clinton turned over to her former agency in 2014. Cotca said they dated to 2010 and showed that keeping up the hunt for potential repositories of Clinton’s emails could be fruitful.

Of the three judges, Wilkins sounded weariest of the Clinton email saga and most eager to bring it to a close.

When Cotca said whether Clinton was intending to avoid FOIA was “a critical question in this case that has to be answered,” Wilkins interrupted.

“I don’t understand why that’s a question that has to be answered,” he declared. “The question is whether there’s been an adequate search. What difference does it make what the intent was or what her reasons were for using a private server?”

At another point, when the Judicial Watch lawyer referred to the Clinton email litigation as “a multi-step process,” Wilkins jumped in again.

“It’s certainly been a multi-step process,” he scoffed. “It seems like it’s been about a several-dozen-step process.”

While Judicial Watch has complained that the State Department has continued to resist full disclosure even after Trump’s election, Pillard said she found that hard to believe.

“The State Department now has every incentive to get to the bottom of this. … This is no longer Secretary Clinton’s State Department. This is the Trump State Department,” the judge said. “What I gather you’re saying is there’s some kind of cover-up.”

Pillard also zeroed in on a couple of technical issues in the case. She repeatedly questioned whether requesters had a right to try to use FOIA to force an agency to claw back records that officials keep in private accounts.

“FOIA is to look at what the agency has, not to go out and find new records,” Pillard said.

In 2016, a D.C. Circuit panel ruled that messages in private accounts can sometimes be official agency records subject to disclosure under FOIA. However, the court was vague about when agencies would be required to ask their employees to perform such a search.

Freeman said the Justice Department’s general view was that agencies should have to search only records they currently have, but the State Department “voluntarily” agreed to perform searches of messages Clinton, Mills, the FBI and others submitted after requests came in.

“We’ve just tried to put it all behind us,” said Freeman, even as many of the suits involved close in on a decade in the courts, with no obvious end in sight.