Anxiety in Abia as Ikpeazu remains Covid-19 positive, weeks after relocating to Abuja for treament 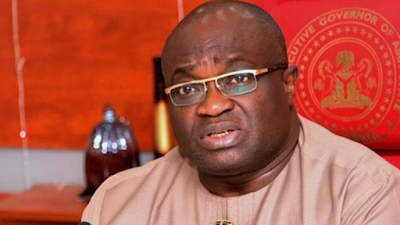 Anxiety has mounted in Abia State over the health status of Governor Okezie Ikpeazu, who is currently battling Covid-19.

According to a source who spoke with newsmen on the condition of anonymity, the people of Abia State are now worried, especially that Ikpeazu has relocated to Abuja for better treatment and is yet to recover from the deadly virus several weeks after.

Recall that Ikpeazu’s result came out negative following his test on May 30. However, he submitted another sample on June 4, which turned out to be positive.

Ikpeazu tested positive to the deadly infection as the Nigeria Centre for Disease Control reported fresh 67 cases of Covid-19 in Abia state on Sunday, June 7.


On June 8, the sick governor directed his deputy gov to act on his behalf in a brief statement on Abia State Government’s Twitter handle.

Before his situation got worse, Ikpeazu had reportedly made attempts to be flown abroad but the restriction on international flights ban in many countries around the world and his positive status of the virus put paid to that move.

Though he is believed to be in a stable condition at the moment, he is said to still be a long way from full recovery.