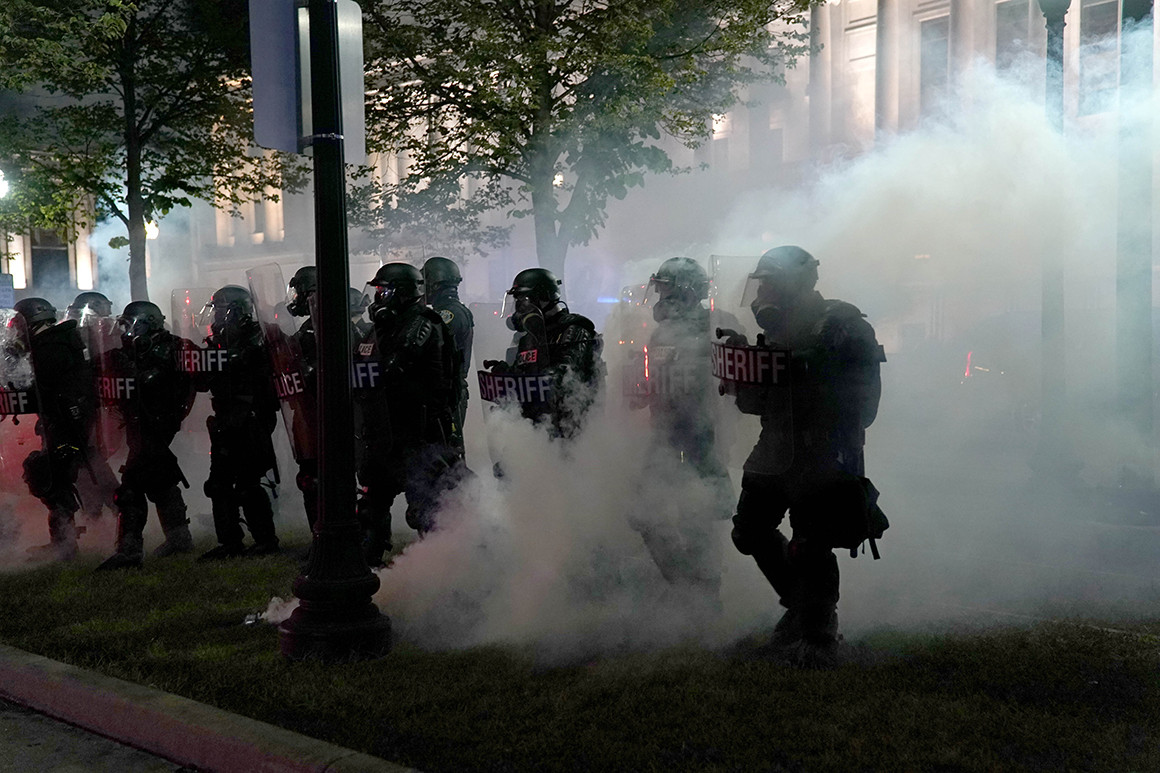 Police clear a park of protesters outside the Kenosha County Courthouse on Aug. 25. | David Goldman/AP Photo

The Trump White House and campaign are leaning into social unrest in Kenosha, Wis., and Portland, Ore., as the president’s most potent case for reelection, viewing the violence as a pivotal opportunity to tighten the race and quickly gain ground on Democratic nominee Joe Biden.

Trump and his aides have long wanted to change the subject from the ravages of the coronavirus — and now, amid deadly unrest in Wisconsin and Oregon, much of Trump world feels like it’s finally found a new target.

The recent events give President Donald Trump the opportunity to broadly reframe the election in terms he and his aides feel will be far more favorable to him. They hope to make it a referendum on public safety — a topic that tends to energize the Republican base — rather than an up-or-down vote on Trump’s handling of a devastating pandemic or still-crippled economy, according to interviews with a half-dozen senior administration officials, campaign officials and Trump advisers.

“The mob will leave you alone if you give them what you want,” Trump warned Monday night during a White House briefing that at times sounded more like a campaign speech. “It doesn’t work that way. Because you give and give and give, and you take and they no longer respect you. And that’s what’s happening with the Democrats.”

The Trump orbit intends to keep hammering its emerging law-and-order message on Tuesday when Trump visits Kenosha, the city where a white police officer recently shot a Black 29-year-old, Jacob Blake, in the back seven times in front of his three children, ages 3 to 8. Since that shooting, violence has plagued the city — from arson to looting to an armed white vigilante accused of killing two people during a protest.

The president himself on Monday defended that shooting suspect and declined to criticize his own supporters who fired paintball guns on protesters in Portland — calling their actions a “peaceful protest.”

In Kenosha, the president plans to meet with local law enforcement and business owners and examine the damage from recent riots. Trump said he does not plan to meet with Blake’s family.

Although White House aides had been considering a visit to Kenosha in recent days, a firm plan was not yet in place until a reporter asked Trump about it on Saturday as he surveyed hurricane damage in Texas, and he said he would probably go. Aides rushed to make the visit happen, even as the Democratic governor of Wisconsin pleaded with Trump to stay away and wrote in a letter that the president’s presence would only “hinder our healing.”

Trump and his team were not deterred. The president on Monday dismissed concerns his visit could exacerbate tensions in the area, claiming it will “increase enthusiasm and it could increase love and respect for our country.”

Many aides believe zeroing in on public safety is a winning message in key swing states such as Wisconsin and among key demographic groups including suburban, female and independent voters.

Polling conducted Aug. 17-20 by the pro-Trump group America First Policies showed that messaging saying Democrats are to blame for the unrest would resonate with Republican, independent and male voters and residents of closely contested states in this election cycle, according to a copy of the poll results obtained by POLITICO.

The majority of independent voters in that group’s polling were also receptive to the idea that the protests are no longer about racial injustice and instead have morphed into a platform for those who want to tear down the government — themes the Trump campaign and White House have latched on to in recent days.

“The president’s tweets suggest he is not going to Kenosha to be a hero,” said presidential historian Timothy Naftali. “Donald Trump has signaled that he wants to politicize the anger in our streets and the question in this election is whether Americans would prefer, as they used to prefer, a candidate who seeks to calm the streets or who can look for a middle way.”

Typically, incumbent presidents who oversee such tumult — in this case, from a pandemic and social unrest — do not win reelection nor do they visit troubled cities they oversee, added Naftali, a professor at New York University.

The Trump campaign has been seeking to cast the violence, looting and arson as examples of failed leadership at the local level in blue cities and states rather than a byproduct of the president’ style, his incendiary approach to politics or his aggressive tweeting.

READ ALSO:  Biden will wait for recommendation on sharing secrets with Trump

Trump campaign communications director Tim Murtaugh told reporters Monday that the president has reacted to the violence by offering to send in the National Guard to cities, or by supporting proposed legislation on police reform from Republican Sen. Tim Scott of South Carolina.

Murtaugh sought to make the unrest an issue seemingly separate from the White House by saying the president did not condone violence in any city.

But Trump’s Twitter feed reached a fever pitch in recent days over the issue. “The Radical Left Mayors & Governors of Cities where this crazy violence is taking place have lost control of their ‘Movement’. It wasn’t supposed to be like this, but the Anarchists & Agitators got carried away and don’t listen anymore — even forced Slow Joe out of basement!” Trump wrote on Twitter midmorning Monday.

A recent spate of nonpartisan polls before the GOP convention, however, show the issue of public safety and law order does not necessarily give Trump an advantage over Biden.

A CNN poll from mid-August showed voters narrowly preferred Biden, 50 to 47 percent, when asked which candidate would keep Americans “safe from harm.” Roughly the same result showed up in a Fox News poll from mid-August in which Biden led Trump, 48 percent to 42 percent, on policing and criminal justice issues.

An NBC/Wall Street Journal poll showed voters giving Trump a slight preference when asked which candidate was better equipped to deal with crime. That polling occurred before the riots in Kenosha and Portland.

To Trump aides, advisers and allies, the unrest in cities gives Trump a way to contrast his leadership style with Biden. But most important, it gives them a break from a pandemic that has killed more than 180,000 Americans. In Monday’s press briefing, Trump briefly touched on coronavirus before turning his attention to cities, social unrest and the Democrats.

And the Trump campaign on Monday succeeded in forcing Biden to respond to their charges that the violence is happening primarily in liberal-run cities. Trump aides say it’s a byproduct of Democratic leadership and foreshadowing of a Biden presidency.

Biden sought to shut down the emerging campaign theme. “Do I look like a radical socialist with a soft spot for rioters?” he said during an appearance in Pittsburgh, where he condemned violence and lawlessness. “These are the images of Donald Trump’s America today.”

At one point, Biden noted that more police officers have died of Covid-19 in 2020 than they have on patrol.

Matthew Choi contributed to this report.