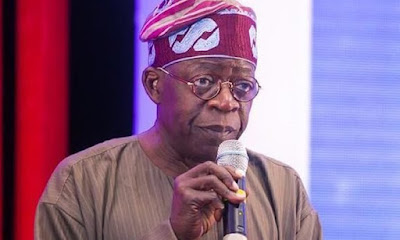 Tinubu’s campaign posters have appeared in Nigeria, the United Kingdom, and the United States in recent months.

However, the former Lagos governor has yet to comment on his plans.

Several Nigerian politicians have paid Tinubu visits in recent weeks while he has been in London for medical treatment.

Speaking on an Arise Television programme on Tuesday, Ogunlewe said Tinubu is the appropriate person to succeed President Muhammadu Buhari.

He said a campaign team will be launched in Lagos on Thursday to kick-start the activities of his participation as a candidate in the 2023 election.

“We need a thinker and someone who has paid his dues in the struggle for democracy, and we’re appealing to Senator Bola Ahmed Tinubu to come out and participate,” Ogunlewe said.

READ ALSO:  President Buhari applauds Nigerian man who found a wallet loaded with cash in Japan and returned it

“On Thursday, we will launch the Lagos faction of his campaign team, so that everybody would be aware of his intention to contest. Then we move from there to participate in the national convention, where they are going to choose the flagbearer of the party.

“He is sick but he’s getting better on a daily basis. He has more time to recuperate and come back to tell us whether he accepts to run or not, but definitely, he has not said so.

“We are just thinking he’s the appropriate person to run for the presidency of Nigeria.”

After being accused of stealing a phone, a pastor was almost lynched (video)

Tonto Dikeh says in a new video, “I never fucked anyone over who didn’t see it coming.”

Only one person in this country is finer than me, according to BBNaija’s Angel Smith.

Three family members and seven others were killed in a car accident in Kwara.

‘You’ve attained this level of power.’ Tiwa Savage is being dragged by Nigerians for lying about her s*x tape.

Piggyvest breaks its silence after a couple, Bamise and Elizabeth Ajetunmobi, allegedly flee with N2 billion in investor funds.